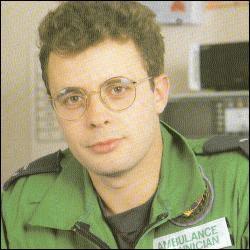 [Bringing a patient into resus] She was crushed by the steering wheel. Semi-conscious and breathless since. She’ll need chest x-rays. I think he trapped her left chest wall.

Young welsh paramedic Brian joined the team midway through Series 8. He replaced Jane Scott, who Josh had enjoyed working with, so Josh didn’t get on with him very well, especially when Brian often would argue with Josh over the correct treatment of patients. Brian has good intentions and is keen to do his job properly, but doesn’t understand that experience is also important, something he doesn’t yet have much of.

In S8 E9 Brian he had a argument with Josh over a shout they had been at, Josh telling him he shouldn’t argue in front of patients because things that are said could get out to other people after which could ultimately get them in trouble. Brian just informed him that he is only trying to do his best, even if it doesn’t seem to be good enough.

In S8 E10, Josh and Brian are called out to see a patient who had fallen down some garden steps. The patient in question was scared of hospitals and didn’t want to go in. Brian told her that she had to be taken in and later, Josh informed Brian that he should have handled that patient better because of her being scared instead of, as it seemed like he did, make the situation a whole lot worse. He told Brian to treat the patients like real human beings and not just corpses, but Brain snapped that if he ever needed lessons in dealing with people he wouldn’t take them from Josh.

Later on, Brian is talking to Frankie about the way that he feels about working with Josh. Jane overhears and asks Brian what the problem is. He tells her that during a shout, he didn’t agree with Josh and said so, but Josh still went ahead with what he thought. Jane gets annoyed with Brian and tells him that as Josh’s working partner, it is his job to back Josh up and support him, not to argue and disagree with his decisions.