Casualty - Back to Ours 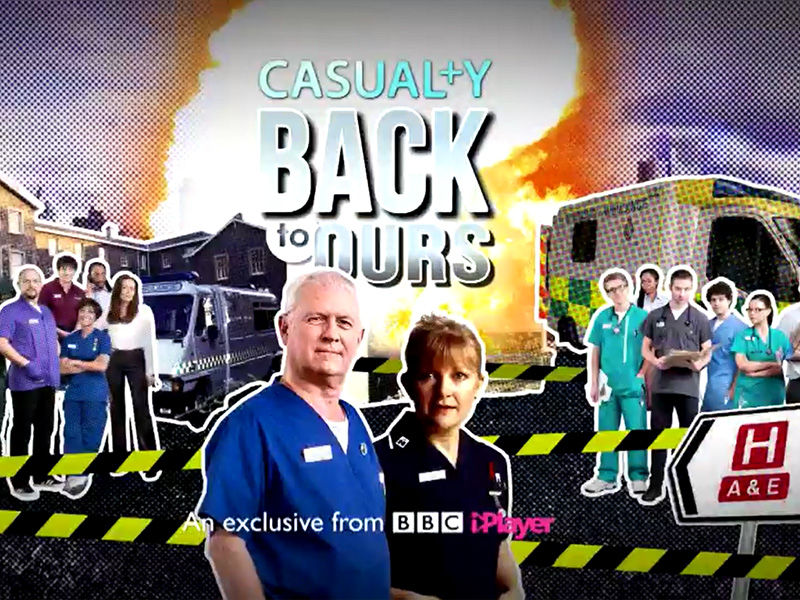 Cathy Shipton (Duffy) and Derek Thompson (Charlie) hop on the medical beds for a BBC iPlayer exclusive Back to Ours to relive the stunts, explosions, emotional storylines and Hollywood guest stars, as they celebrate 30 years of BBC One’s Casualty.

Charlie and Duffy’s characters have always been like sliding doors. We see them revisiting their Casualty filming days, from Bristol to Cardiff and Lapland to Cambodia. Join Derek and Cathy as they share with us their unique insights into production and funny personal stories from nearly 30 years of working together.

Chatting to Cathy as they take a trip down memory lane, Derek Thompson recalls memories from the first series in 1986: “Do you remember the wonderful speech that Geraint Morris made after the first read-through – he said ‘right, the audition is over, it’s yours now. It’s up to you, take it, have it’. What a feller, happy days.

Cathy Shipton, who re-joined the show in June this year as a regular cast member, adds: “It did feel like it was going to be a thorn in someone’s side at the start. It caused ructions in the House of Commons. Edwina Currie stood up, there were questions in the House, and it was on the front of the Observer. Our show was pro NHS and public service, and you were the union leader.”

Derek also remembers when Kate Winslet played a guest role in series seven of Casualty: “She was very young, she was exceptional. She worked like hell, and when she was in front of the camera she was so relaxed, so to the point that actually you’d find that those who had a great deal more experience, she’d brought their game up. I’m so pleased she’s so successful.”

Previous episodes of the Back to Ours series have received 4.6 million views on BBC iPlayer to date. This episode will be available on BBC iPlayer from Saturday 20 August, at 6pm for 30 days.