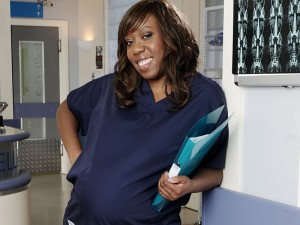 Chizzy Akudolu joins the cast of HOLBY CITY next week as surgeon Mo Effanga. She talks to holby.tv about her character and what’s in store…

So what can you tell us about your character in your first episode?

In my first episode, Mo comes in to do a heart and lung transplant but what she realises is that the person who’s receiving it only need the lungs so she thinks ‘why don’t we pass this heart on?’, like a domino. We then give the heart to another patient. So that is the main story.

Then there’s also the back story in that Mo is heavily pregnant. Everyone’s thinking she’ll be off in a couple of weeks on maternity leave. But it doesn’t quite happen like that!

What’s Mo like? She sounds a full on character!

Mo is very passionate about transplants. She’s really nice, quite a giving person.But she’s also quite authorative when she needs to be, for instance with Tara and Oliver– she needs to make sure they know they are there to work. Whatever relationship they have or don’t have doesn’t interfere with that – that it’s about the work and you have to stay professional.

I never forget, I got off the tube and had a message on my phone saying about a job as a regular on Holby. I called back and was sent the breakdown and it mentioned transplants and I thought that’s me, I have to get this! She’s a force of nature, she’s very friendly.

What’s your own view on transplants?

Not just from this but I am also very passionate about transplants, like Mo.I think we should opt out rather than opt in, because too many organs are going to waste with people not having a donor card. Parents can still come in and stop it, even if they have got a donor card. My brother had a transplant about five years ago. He’d been on dialysis for a long time, so to see what he went through. The transplant gave him a new lease of life. I think it’s one of those amazing gifts you could give to a stranger.

So this will also lead as a platform to highlight the donor issue?

I don’t want to use the black card, but there is also an issue with not a lot of black people carrying the donor card. There’s so many Afro-Caribbean’s waiting for a transplant.

I don’t want to say it’s such an easy thing to do but in a way it is if you think about it. I understand people can get attached to the body and they want to preserve it but they still can. At the end of the day, you’re going in the ground or being cremated

It looked right. I adopted the walk and developed the waddle! When I was walking back from lunch one day really slowly, Jimmy [Akingbola] reminded me I wasn’t really pregnant. And I joked ‘But Jimmy I am!’

The bump is not that heavy but it just sits right. It’s made from hard foam so when you touch it, it feels real. When I first started it was fine but sometimes it was uncomfortable filming in theatre, where it gets quite hot.

What was it like filming the birth? How did you prepare for it?

I’ve never given birth so I wouldn’t like to say I know what it’s like but filming it was knackering!I’ve been watching ‘One Born Every Minute’ in preparation but also my Mum used to be a midwife. I remember she used to show us videos, when we were kids of women giving birth and wondered why none of us became midwives or teenage pregnancies!You see people giving birth on TV, so I thought it best to see what it really is like and that put me off as well!

Do we know anything about the father of the baby?

The father of the baby is a secret! Nobody really knows. I don’t either at the moment. But its something we will find out later down the line. We may possibly already know the dad, I don’t know.

How does it work with her having the baby and coming back to work?

As far as Mo’s concerned she has two weeks off but she would come back to work straight away if she could! Work is where she feels most comfortable; it’s where she does her best stuff. Her homes life is crazy, very erratic. If you go to her house, I could imagine it being a mess, clothes everywhere – everything in her private life is a mess.

Have you filmed with the baby yet?

Yes the baby was lovely, everybody was cooing! The baby upstaged me! Knew all the lines and everything!

It’s funny because aesthetically,you’d wonder how they became friends. But there’s something about Jonny and Mo, they just click. There is a bit of hierarchy where Mo is his boss but that’s only when they are in front of other people and if there’s a medical decision to be made, besides that it’s pretty much brother/ sister banter. They like to bicker!

So some light hearted scenes between them?

They have a lovely relationship. There’s a lovely bit in the first episode where he massages her feet at the end of the day. She doesn’t have to ask him to do it; it’s that kind of relationship. They have that bond which I’m pretty sure Jac doesn’t like.

How much interaction does Mo have with Jac?

Quite a bit. Because they are both surgeons and on Darwin. There’s a butting of heads but more on Jac’s side. She sees Mo as a threat on many levels, professionally but also due to her close friendship with Jonny. Jac worries Jonny is telling Mo about things. Also Mo is pregnant, which I think Jac is threatened by too. I’ve seen a previous episode where Jac became almost a surrogate mother to an abandoned baby, so I can imagine Jac, as professional as she is; I think she would want a baby. She sees this new surgeon come in, who’s really good at her job and is pregnant. She doesn’t like Mo; I wouldn’t say she hated her though.

Were you at all daunted about joining the show and it’s fast pace of filming?

I was very nervous. It’s like your first day at school. As you don’t know how people are going to be. But also now I feel I have to prove myself!

I had one scene on the first day and then two the following and thought it was easy and then I started the first episode and boom – hours and hours of filming, worried about if I would remember all the lines! There’s a lot to learn and I wasn’t used to learning things in such a short space of time.

Did you have to do any medical research?

We went to a heart hospital to meet a heart Consultant. He showed me how to use some of their instruments. But apart from that it’s been pretty much on the job. It’s amazing when you see the prosthetics such as the first time I saw heart thumping on the body.

Are you at all squeamish?

Not at all which I didn’t know until I started.

Were you a fan of Holby City before you joined?

Yes and my Dad is also a big Holby fan. I’ve been watching Holby for years, on and off and then when you meet the cast in real life you wonder how much they are like their characters!

What did you discover?

Rosie Marcel is so nice compared to Jac. Guy Henry is also very different to his character. He’s so funny. The first time I saw him corpse was hilarious as you don’t normally see ‘Hanssen’ smile!Jimmy, who I’ve known for over ten years, is also nothing like his character. Malick is very arrogant!

On the other side, Bob Barrett I guess is very much like his character. I saw Bob before my first casting and told him I may be working with him and he gave me a big hug and told me he hoped I’d get it. He’s like a huggable bear! I don’t think anyone has got a bad word to say about him.

Was it nice to be working with Jimmy, who you already were friends with?

It feels like someone has got your back. Jimmy’s been a bit of a guru for me over the years. He’s so helpful and friendly and everyone loves Jimmy!

What else have you got planned?

I’ve also written a play ‘The Rec Room’ for Jimmy’s Tri-Force Promotions. I’m producing it in October at the Lost Theatre. It’s exciting and Tri-Force is becoming massive which is great to see.