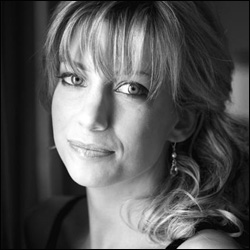 BORN : In Edinburgh, she lived there will she was 2 and a half, in a little village called Clarewood. She grew up in Norfolk.

FAMILY : Mother, Joy and father, David, who is a GP in Kings Lynn, Norfolk. Claire has a sister Caroline (2+), who is a nursery nurse, and a brother, Duncan (6+), who works in marketing. Duncan recently got caught in Hurricane Mitch in Honduras – which worried his whole family, Claire sent him emails to comfort him. Other family members include an Aunt Liz, Uncle Dick and cousins James, Rob and Nick.

PREVIOUS RELATIONSHIPS : Split from ex-CASUALTY actor Jonathan Kerrigan in August 2001 after a four year relationship saying ‘We feel very sad that our relationship has come to an end but we are still extremely good friends.’. They kept their romance a secret at the beginning, ‘We kept it from people on CASUALTY for four months and because we were part of a big group it was easier to disguise.. we miss the times when it was our little secret.’

STUDIED : At the age of 16, she went to the Italia Conti Stage School.

PREVIOUS JOBS: Her first job was a silver service waitress in a pub, she has also been a story telling raccoon in a theme park, worked a the Toulose Cafe in Hampstead, admin work for the NSPCC and also done modelling.

FAILED ACTING JOBS: Claire nearly got the role of Tiffany in Eastenders – it was down to her and Martine McCutcheon. She was also down to the last two for a role in Soldier Soldier. Claire says ‘It was exciting getting so close, as you know you did a good audition, but I kept thinking when is this going to break’ but she believes in fate, ‘I’m really glad I didn’t get it now – I wouldn’t have missed the chance to play Tina’

ON HER CHARACTER TINA: ‘Tina is an incredibly strong, independent person – whatever she’s been dealt so far, she has come through stronger. I love that about her’.

ON LETTERS SHE RECEIVED AFTER HER RAPE STORYLINE: ‘I found it very hard to deal with. One boy had been raped by a family member and was petrified he’d break up the family or he wouldn’t be believed. People write to you in desperation. I wrote back to all of them.’

REAL LIFE CASUALTY INCIDENTS : During filming for S13, Claire’s stomach became painful and swollen and she was told to get medical attention. At hospital she was diagnosed with a gastric and viral infection, ‘It did feel like being in Holby Hospital, but a bit less dramatic.’ During ‘Waking the Dead’ filming, she found a lump in her breast, which luckily were benign, ‘The worst thing was Jon was away filming Merseybeat and my parents were abroad. But my friends Rebecca Lacey and Rebecca Wheatley came with me for the results.. It has made me take notice of my health and not take life for granted!’

WHO MAKES HER LAUGH : Billy Connolly ‘crude, rude and Celtic’

BEST FRIENDS: Andrea Gordon, who she met when they did a ‘Wash n Go’ commercial together, and also Rebecca Lacey, who she shared a flat with in Bristol, she describes her as ‘my soulmate’.

FIRST MEMORY : Of having two brother cats, one called Sam – who was addicted to crisps!

FIRST THING SHE DOES IN MORNING: ‘Have a cup of tea and a bath – or I’m no good to anyone!’

WHAT SHE SPENT MONEY ON AS A CHILD: ‘Magazines like Smash Hits and More. All the teen mags really’.

THEATRE CREDITS: Hitting Home; Recollections; The Home Run; Addicted to Love; When We Are Rich; The Perfect Murder

BOOKS: Appears in ‘CASUALTY : Behind the Scenes’ by Rachel Silver

* Since 11, she’s dreamed of being in CASUALTY, ‘I was the show’s number one fan, and still can’t believe my first proper job on TV was acting with so many people who are my heroes’.

* Claire also has psychic powers – and had a premonition of 1984’s Brighton bombing.

* Claire has helped raise money for a special appeal for the Honduras Relief Appeal. In 2000, she also accompanied the Red Cross to Mozambique to help the victims of floods, ‘I am sure there are instances where stars take part in these kind of projects to boost their image, but I’ve never wanted to be someone who goes home after two days, leaving everything behind, I couldn’t sit back and watch other people dig the ground, plant seeds and hand out supplies. I wanted to help too.’

Since leaving CASUALTY, Claire Goose joined another successful BBC drama Waking the Dead and has continued to work steadily in television and theatre. She took leave from ‘The Bill’ in 2009 to have a baby. In 2015, she was onscreen in new daytime drama ‘The Coroner’ headlining alongside Matt Bardock to great reviews.