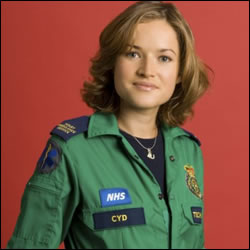 Cyd, short for Cynthia, is the complete opposite of her paramedic partner, Dixie. But she looks up to ally Dixie who took her in as a weary young girl and seems always there to support her – but could their symbiotic relationship faulter? Cyd is very spiritual person and wears her heart on her sleeve.

When she first arrives in S21 E3 with colleague Dixie, after their transferral from a different hospital, Josh finds their laid-back attitude difficult and decides to break up their partnership. In S21 E4, the more rebellious Dixie tries to switch rotas which doesn’t go down well with Josh, who feels undermined. Cyd is partnered with Greg, giving them a chance to get to know eachother although Greg is coy in his past. Next episode Cyd reveals an insightful talent for reading people. Cyd has an admirer in Guppy, who in S21 E8, attempts to impress her but ends up pretending that it is his birthday as an excuse to ask her to the pub. In S21 E19, following recent tragedy that involved Ellen’s death, members of the team including Cyd head to the coast but their trip doesn’t quite go to plan when they end up helping in a sea rescue attempt. Greg confides in Cyd about his close friend’s death and back in the staffroom, Cyd tries to kiss him but he backs off. In S21 E20, Cyd’s loyalties are torn when Greg and Dixie reveal they are both applying for Josh’s job. When Dixie announces she has got the job in S21 E22, she is not happy that Cyd doesn’t seem to have much confidence in her abilities. In S21 E24, Dixie falls asleep at the wheel as herself and Cyd arrive at the scene of an accident. Cyd wakes her up just as they pull up and snaps at Dixie’s stupidity. Dixie admits that she messed up the rota and that she is doing two shifts back to back and that is why she is so tired. Cyd shouts at her about how dangerous it is for her to work in that type of state and demands that she goes home. In S21 E25, Abs notices the attraction between Greg and Cyd and tells Greg he should make a move. Greg tells him he’s not long out of an intense relationship but Abs tells him he should move on. Having been roped into a testicular cancer project for students, Greg, wearing just his boxers, plucks up the courage to ask Cyd out and they kiss. In S21 E26, Dixie looks put out when Greg kisses Cyd infront of her and announces they are having a night in together.