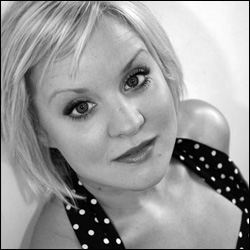 BORN : Cannock, Staffordshire. Then moved to Bristol when she was 13.

FAMILY : On her mother, ‘Everywhere my Mum goes she tells people I’m in CASUALTY. I’m like ‘Mum Shut Up!’ I think she’s been more excited than me!’

ON CHARACTER GILLY : ‘Gilly resents her father over the way he treated the family in the past and his alcoholism. She hates the fact that now he’s trying to play the loving father. The first thing I say to him when I arrive is, “Can you give me a tenner?” Gilly is determined to get everything out of her father, and she knows she can wrap him round her little finger. I don’t think Gilly always means to be nasty. She’s cheeky and sneeky to get things she wants, but she’s no plotter.’

ON GETTING PART : ‘I’d been warned to expect to spend at least a year going to auditions and not getting anywhere. I went along to CASUALTY just to gain audition experience as much as anything. I never seriously thought I’d get the part. I couldn’t stop screaming when I heard – it’s such a good part.’

ON CASUALTY : ‘I’ve watched the show since I was little. It was a Saturday night treat – staying up late with a bag of Pick ‘n’ Mix and watching CASUALTY. And then there I was, meeting Duffy and Charlie in the flesh! I was so excited I could hardly speak.’

OTHER CASUALTY APPEARANCE : Emily has appeared in CASUALTY after her role as Gilly. She played Wendy Trowbridge in S19 E15. [More Info]

FILM CREDITS : The Boy with a Thorn in His Side