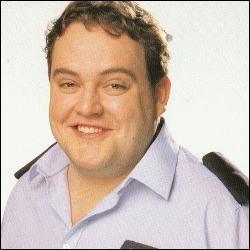 [The department is busy, and Duffy talks to Frankie without really paying much attention to him.]

Frankie. Frank by name, frank by nature. My friends and admirers call me Frankie.

Duffy: Really – well there’s a patient in cubicle 1 could you take him up to xray please.

Frankie: Consider it done. Err, Sister? Where’s xray? Joking, just joking! [to Charlie] She likes me you know, I can always tell…

Got a problem? Frankie Drummer would have a go at diagnosing and curing you as he pushed your wheelchair up to the Casualty reception desk.

Some people thought that Frankie was a bit of a pain himself, and often didn’t appreciate his ready sense of humour. He was certainly a comic character – described as being all bluster and blubber!

Frankie liked his food and home comforts. He had a well-paid job as a manual worker in a factory until the recession changed things and he and his wife decided to come back to Holby, her home town. He thought the world of her and their three girls – although he’d have liked to have a boy!

Frankie had definite fixed opinions on doctors, nurses, gay people and what would put the country to rights. If he didn’t say it, he’d pull a face or roll his eyes. When there was ever a disturbance or fight in the department, he was worth his weight in gold. Viewers of Series 8 saw him get tough with troublemakers soon enough.

In S8 E15, Charlie is sharp with Frankie throughout the shift, but later Frankie comes to his rescue, performing the Heimlich manoeuvre when Charlie is choking on some bread.

He showed that he cared when Jane was promoted to A&E’s line manager midway through Series 8. The rest of the staff were unimpressed so when Frankie showed up in her office, Jane was sure he’d only come to poke fun at her. However she was pleased when he presented her with a plant he’d bought her for her new office.