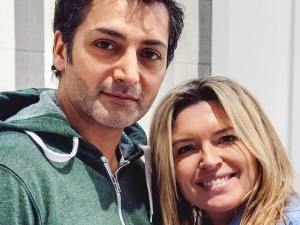 In a special Red Button entitled ‘A Night Like This’ which is due to be screened after Tuesday 18th June’s episode, it shows Chrissie spend the night at the home of colleague Michael Spence.

With tension between couple Sacha and Chrissie over his daughter’s bone marrow transplant and Michael struggling with a cancer patient Seb, Chrissie and Michael find they’re an unlikely shoulder to cry on for one another.

‘It not only gives us one of those rare and delicious opportunities to go outside the world of the hospital into the home of one of our characters – but also showcases two of our most long-time, full-blooded and beloved regulars, Chrissie and Michael. Viewers can expect plenty of sparks.’