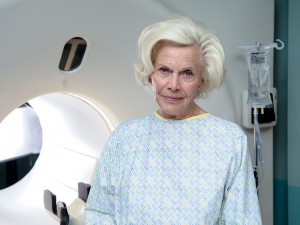 Bond actress Honor Blackman is to appear in CASUALTY playing a feisty pensioner.

Her character ends up in hospital after being hit by a bicycle and reveals to the ED staff that she has a past which includes driving ambulances in African warzones.

Honor made her name in The Avengers and played Pussy Galore in the Bond film Goldfinger.

She appears in the first episode of the new series, which starts this Saturday 3rd August.

“We’ve had a long history of famous guest appearances but never a Bond girl.”

Aside from acting duties, Honor is set to tour a one woman show – on her life and rise to stardom – around the UK in September.