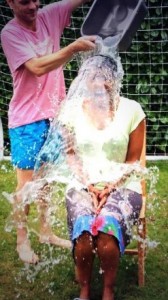 The Ice Bucket Challenge involves having a bucket of ice water thrown over your head to promote awareness for ALS.

ALS is the American name for the condition usually referred to as motor neurone disease (MND) in the UK, where the leading organisation is the Motor Neurone Disease Association. Anyone accepting the challenge is urged to share a video of the event and nominate someone else to do the same, making a donation to the charity.

If you want to donate visit the Motor Neurone Disease website.

Take a look at some of our stars in action…