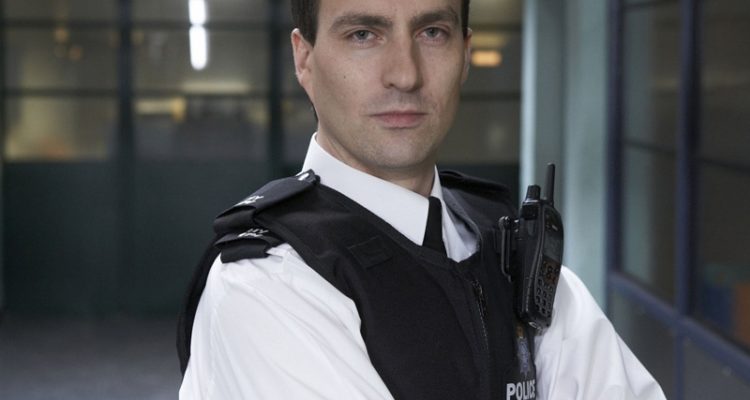 James Thornton plays new PC on the block, Jake Loughton, who, after being transferred to Holby South, goes to great lengths to hide the reason for his move and manages to offend his first partner at the precinct in the process.

In real life James is happily married to Gavin & Stacey’s Joanna Page and a devoted owner to Jack Russell, Daisy. Taking time out from filming on his exciting new role, James chats about dressing up in uniforms, his Sing Star secrets and taking a leak in the woods…

PC Jake Loughton is the newest PC in the station, what’s he like?

Jake is introduced during one of the station briefings and he gives the impression that he is fairly laid back about it all. However, it later becomes clear that his transfer to Holby was not quite as straight forward as it seems.

So where has he come from?

Jake has transferred from Preston. Coming to Holby from the north has been a big move for him and it very quickly becomes a subject that fellow northerner PC Lucy Slater wants to question him about. He is very guarded about his reasons for moving stations and not particularly forthcoming with any details regarding his personal life, leaving her with many unanswered questions. It is clear that he is pretty experienced in his job right from the start as he seems very assertive and self assured. This only serves to intrigue Lucy even more.

Does he settle in well?

Yes. He settles in pretty well with most of the team. Professionally he fits in easily but it is clear that he is in no rush to reveal much about his past.

Uniform tend to work in teams of two, who does Inspector Jenny Black partner him with?

PC Lucy Slater. At first he has a few issues when it comes to being partnered with her. He sees her as an inexperienced rookie and wrongly judges her approach to the job. In later episodes it becomes clear that Jake is dealing with much more than a simple move from his station in Preston and you get to see why he initially has problems adjusting to working with her.

Jake and Lucy definitely clash, why does she irritate him so much?

I think it has a lot to do with what has just happened to Jake and that he feels, by working with Lucy, he is taking a backward step professionally. He is not at all pleased when he overhears Lucy asking Jenny if she can be partnered with someone else and it seems that they are just never going get on.

So why does Jake annoy Lucy so much?

Lucy thinks Jake is arrogant and Jake thinks he needs to control Lucy, as he presumes that she is just young, weak and inexperienced. This really annoys her so she soon puts him straight and lets him know who’s really boss!

How does Jake eventually come to respect his new team mate?

He begins to see that Lucy is a really strong woman and he really likes the way she never backs down when faced with a challenge. When he sees her take down a drug dealer and gives him a hefty whack with her asp (baton) he realises that she is no push over and not someone to be messed with! He really likes that about her!

Lucy eventually finds out why he’s been transferred – what’s his reason?

Ooh, I’m not sure if I should say!!! Let’s just say he has not been playing by the rules and has been left with no choice but to face the consequences of his actions. He chooses to take the transfer as it allows him to escape problems with both his professional and private life!

What has been the best thing about filming HolbyBlue?

It is really great fun dressing up as a cop and running around pretending to catch criminals but I now realise you have to be really careful when you are working on location dressed in the uniform. We were filming out near some woods recently and I was desperate for a wee. We had no toilets nearby and we were pushed for time to get everything shot before it got dark and I was bursting, so nipped behind a tree! Afterwards I realised that it must have looked really weird to anyone who didn’t know I was a fake policeman! Not one of my smarter moves. So to anyone out in Chertsey who may have been worried that the local police are inconsiderate louts, they are really lovely and would never wee in the woods! It was me and I am very, very sorry!

What has been your favourite scene to film so far?

I really loved filming all the action scenes; catching criminals and driving the police car at speed! When we shoot those scenes I feel like a kid again and get really excited!

You played Sergeant Philip ‘Hippie’ Roper in Red Cap. How does the Police force compare to the army?

It’s just as exciting but the two characters are very different. Roper in Red Cap was much more like Cal (MacAninch) and Richard’s (Harrington) characters in HolbyBlue as he was the military equivalent of CID; in the army they’re called SIB. He wore a suit and led many of the cases. PC Jake Loughton is much more ‘hands on’. I spend most of my time in uniform and get to investigate the crimes as they happen on the street. I really loved working on Red Cap because, like HolbyBlue, the cast were great fun and I got to run around with a gun and drive around in jeeps and tanks.

You played a nurse in No Angels and now a police officer in Holby Blue. Do you have any desire to play a fireman and complete the hat-trick?

Well as it happens I have already played a fireman in Playing the Field! I played the team coach Scott Bradley for two series and although I never thought of it before I suppose I do have the full set now! My wife, Joanna (Page, from Gavin & Stacey) loves it! She said she fell in love with me when she saw me in my fireman’s trousers and white vest. We weren’t together at the time but it did the trick! I suppose I should have kept all my costumes just in case the acting doesn’t work out. I could start a strip act!

You have been in some high profile films, Plunkett and Macleane as well as Among Giants, does the glamour of Hollywood appeal or do you plan to stay in the UK?

I would never be able to take my Jack Russell terrier Daisy with me if I went to America and so would really miss her. I would love to work on an American show like Heroes since I’m a massive fan. I don’t think I could leave the UK permanently though; I would miss jogging round the park with Daisy going for my ankles!

You sang on some of the tracks for Among Giants! Any plans for an album?

My wife bought me the Sing Star game for my Play Station for Christmas and I do a very ‘original’ version of Ice, Ice Baby by Vanilla Ice. I think I will keep that to the privacy of my own living room though.

You worked with your wife on David Copperfield – do you have any plans to do something together again? Will we ever see you guest starring in Gavin and Stacey?

No, I don’t think that would be a good idea because the last time we worked together we could not stop laughing at each other! It is really funny seeing your partner acting because you know each other too well to believe them.

We worked on a film together recently and I was playing her boyfriend. She had to kick me out of bed and I was supposed to be naked. I had to wear a little flesh coloured thong and was marching around before a take, trying to be all serious and getting into character. We were supposed to be having a row in the scene but Jo couldn’t stop laughing at me, we just found the whole thing hilarious!

No Comments on "James Thornton Interview"