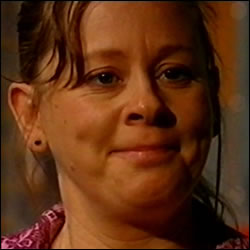 PREVIOUS APPEARANCE : S20 E21 ‘The Things We Do For Love’

STORYLINE : Abs treats confused patient Angus who has cut wounds to his arms. When his wife, Angela, and small baby arrive, Angus is adamant at not wanting to see them. Abs discovers he is hearing voices, telling him to hurt his family. His psychosis has been triggered from the death of his father.