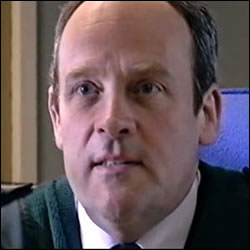 Jeff: Nikki? Are you alright?

We first see unpopular Jeff McGuire in S16 E1, in which he comforts an upset Nikki after an ambulance crash on the first day. Jeff is told by Nikki she believe Josh was travelling too fast at the time of the ambulance crash. Jeff tells Nikki that it’s only her first day and that she couldn’t know how fast was ‘too fast’, and to keep quiet until he’s thought it over. Jeff then decides to tell a police sergeant exactly what Nikki had told him.

To add to his disliked reputation, McGuire then goes on to suspend Josh from driving, before giving the paramedic staff a lecture on how to drive properly involving red lights and that you’re not supposed to drive through them. He is then the subject of verbal abuse from Fin as he angrily tells his boss the pressure that the paramedics are under. Later that evening on return the ambulance station Jeff is thrown Fin’s uniform and told that he can wash the blood of it that night.

As Josh’s trial comes to an end in S16 E6, Josh tells McGuire that he’s not proud of what he’s done, and therefore resigns. As Josh is no longer at work, McGuire then decides to replace Josh with himself, and goes off to a shout with partner Nikki. Except after being a long time from the front line, he soon manages to make a fool of himself by misdiagnose patients and forgetting how to open a trolley. Realising that he’s paramedical skill is no longer there, a reluctant Jeff persuades Josh to return to work by threatening that someone may die without him.

Once again becoming a person related to discipline, Jeff McGuire threatens both Comfort and Fin with a disciplinary action after leaving their ambulance which later got trashed.S17 E2 and S17 E3 sees Jeff talking to Nikki about a bravery award and a new stab vest. More keen on increasing the profile of the ambulance service, Jeff seems to ignore Nikki’s request saying that she couldn’t get a stab vest due to lack of resources before hurriedly backing away.

The next and final time we see Jeff McGuire is S17 E25, parented once again with Nikki, he beings to show his authority over her whilst on a shout. McGuire’s lack of being able to control what he says then leads both Nikki and himself being held hostage by an angry man. The hostage situation then turns nasty as, while Nikki is trying to calm two people down as they try to escape a flat, Jeff is threatening to call the police. As the pair rush over a set of outdoor stairs, a young girl falls to her death. While Nikki runs to help the dying girl, Jeff retreats back to the ambulance to get a trolley, before collapsing on the floor and dying of a heart attack on his last ever shout.