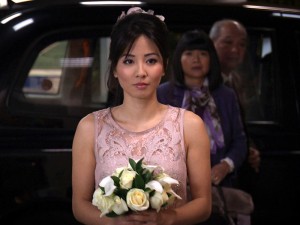 Newly married Tara Lo is about to face her toughest battle yet, when she faces an operation on her growing brain tumour. In the first of a two-part interview with actress Jing Lusi, who plays the medic, she talks about what’s coming up for her…

Tara seemed to be in denial up until recently and refused the operation, what makes her change her mind?

There’s quite a lot of pressure from all sides. She’s been recently suspended and it reaches a point where Hanssen knows, so she’s almost forced into it. It’s not an active choice, there’s a lot of external pressure.

How is Tara with Oliver before the operation?

By this point she is now married to Ollie but her family turn up so there’s conflict between Ollie and the mother-in-law. Tara is quite split with loyalties and her loved ones fighting but in the end he comes into theatre with her as she can only choose one person.

What were her motives for marrying him?

It’s a bit of a shot gun wedding without the pregnancy. I think she wants to donate her organs and knows her parents wouldn’t agree to it, as well as loving Ollie ofcourse, she needed a next of kin that would support her wishes if anything happens to her. It comes out of the blue but they do agree to get married. In Holby land, it’s the day before the operation eventhough on TV-time, it’s one week apart.

We filmed it outside in December. It was one of them days when it was literally minus whatever it was! I saw the dress and thought are there any skin coloured thermals to go with that by any chance as it was freezing! As we were supposed to make it look like it was April, they made us suck on ice cubes to hide our cold breathe and when they did the close up shots, I was layering it on with thermals and ugg boots!

We weren’t actually supposed to film the wedding but on the day the producers thought it was a wasted opportunity to not show it, so they lit up the gazebo outside. All the actors and crew were surprised!

How was it filming the operation scenes for you emotionally?

The interesting thing about the neurosurgery operation is that because it’s in your brain, they have to keep you awake for it. They have to brain map and test your reflexes, so for me it wasn’t just a case of just lying there. Tara is on laughing gas, heavily sedated but hysterical and that’s when they realise something is not quite right. Her Mum comes into the theatre as she then starts speaking in Chinese and they need her to help translate. For me, that was the breaker; I connected emotionally with that and thought this is actually real life for some people, not just difficult for the patient but for the family as well.

I can imagine some actors have trouble crying but I couldn’t keep it in! They’d be setting up the lights, I’d be strapped in, not able to move but crying. They had to keep getting the make-up on Set. I tried to think of fluffy kittens but it was hard, once you’ve gone, it’s very hard to plug it back in. It was exciting in hindsight, but looking back on it; it was very tough to film!

You originally trained in Law, what made you get into acting?

I did some theatre when I was young; I did a musical and I just loved the buzz of it. But being from a Chinese family, I was told to go to University and get a good degree, so I did. I think acting is a very creative form of expression and that is what I lacked, being from a very academic, high pressured family. I used to do lots of unpaid work, give my weekend time up for free and funded myself in a secretarial role to fulfil my acting dream. 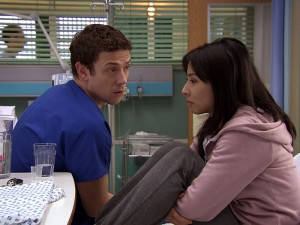 Are your family proud of your acting work now?

They’re so completely supportive. My dad, when I got this job would  go to his friends ‘She’s a doctor!’ as if it was real. I auditioned once before for Holby; for a regular to play a nurse [Elizabeth Tait] but didn’t get it. Then when I got this role he said ‘Well you didn’t want to be a nurse anyway, you wanted to be a doctor!’

They’re so proud and my mum who didn’t use to watch it, now is  avidly a fan and I can’t even discuss storylines with her because she doesn’t want me to spoil anything. Her birthday is on in the week of Tara’s operation, so she doesn’t want to watch it!

Do you get recognised much from your Holby role?

I surprisingly do. When I’m in real life, I look a bit different; I wear   big glasses, don’t wash my hair or wear make-up, have frumpy clothes on and yet I get recognised. I get offended! How can this be the same person, it’s shocking! And it’s when I least expect it, once when I was in a fish and chip shop, I was approached ‘You’re in Holby? You’re a doctor? You’ve got a brain tumour?’… I just wanted some haddock!

* Read the second part of our interview with Jing Lusi click here. *

In the second part of our interview with actress Jing Lusi, who left our screens this week following the sad death of her character... 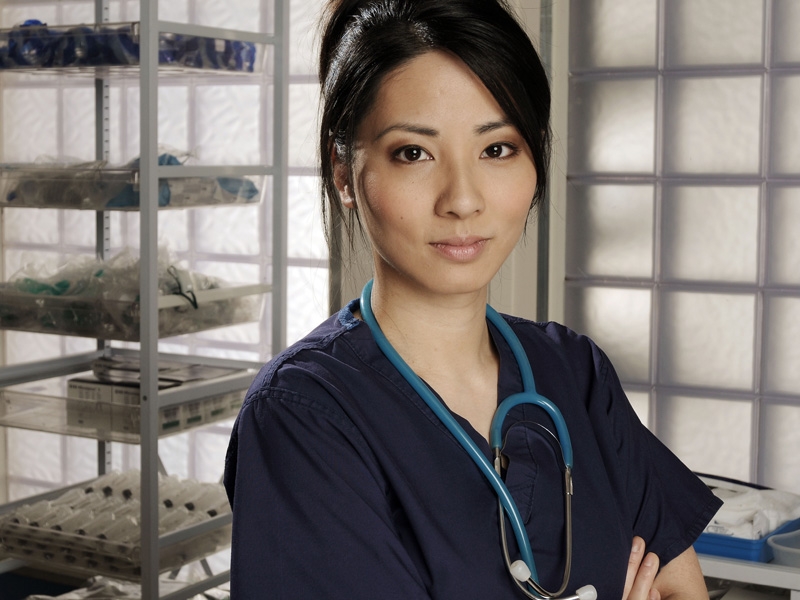 Newcomer Jing Lusi talks to holby.tv about her Holby role as F1 Tara.