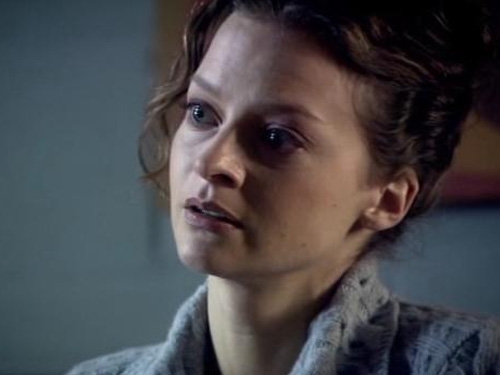 Actress Julie Cox plays DS Luke French’s wife, Mandy. The couple struggle with IVF whilst Luke deals with his mother’s ill health. Julie talks exclusively to holby.tv about her role in the show…

What attracted you to the role in HolbyBlue? What edge do you think HOLBY BLUE has over other police dramas?

I think having KUDOS producing it will elevate the show above the standard of other police dramas, based on their success of Spooks and Hustle.

What can you tell us about your character Mandy French and what’s in store for her?

Mandy is married to Luke, who is married to his work. She has sacrificed her work and friend to move with him; she is fighting for their marriage.

Can you relate to her in any way? Do you have any similar traits?

I honestly can’t find any similarities, her dress sense is something very different to mine but fun to wear for the part.

What’s it like working with the rest of the cast? Who have you bonded with most on Set?

It’s a wonderful cast and crew. Richard, who plays my husband, is continuously entertaining; a quality much needed on such a long shoot.

What was your first day on Set like? Did you have any nerves?

First day was nerve wracking as I have never filmed this kind of TV before. Arrive on Set, say hello to everyone and shoot 8 pages of dialogue.

Are you a fan of either CASUALTY or HOLBY CITY?

I have never watched either show.

You have a number of acting credits to your name – what have been some of the highlights of your career so far?

I am proud of how varied my work has been. A lot of passion has been invested to a lot of projects that are quite ‘arty’ and seen by a limited audience – I loved working with Cirque du Soliel on a film Alegria.

Do you prefer working in TV or film?

Both, though film usually has more time to film so more focus on getting it right.

I am shooting a film now called Oxford Murders with Elijah Wood and John Hunt which is a dream role – but I can’t say too much about it.

You have lived in a number of countries during your life – where do you consider ‘home’? What have been some of your favourite places that you have travelled?

Having lived in London for 12 years, it is definitely my home, but feel most happy in the Scottish Highlands.

Is it true you have a passion for martial arts and kung fu films?

I adore martial arts, studied kick boxing for many years and Asian films are my favourite.

No Comments on "Julie Cox Interview"