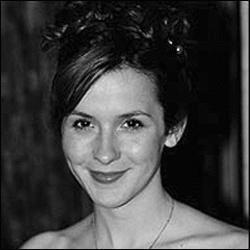 HOLBY CITY’s Tina Hobley said “If you knew Laura you were touched by something very special. She was warm, kind and gentle with a fantastic sense of humour and an infectious giggle. If heaven is full of angels, it now has the most beautiful angel of them all.”

Laura will be sadly missed by her family, friends, colleagues and fans. She touched so many people’s lives and was a true talent and personality.

FAMILY : Her mother, Sonja, is a carer looking after the terminally ill. Estranged father, Geoffrey.

TRAINED : The Sylvia Theatre School in London. She began acting at the age of six.

PREVIOUS JOBS : ‘Painting the toilets in a very grotty nightclub. It was the gents’ toilets so it was really disgusting.’

ON CHARACTER SANDY : ‘She’s very uncomplicated and sweet natured. There’s a gossipy side to her but that’s as bad as it gets – there’s no bitchiness or nastiness. She’s very naive and daffy – I suppose we are quite similar in that, though I’d like to think that I’m a bit brighter than her, though I couldn’t nurse anyone to save my life! I’ve added lots of myself into her so we have quite a bit in common.’

ON NERVES : ‘I still suffer from nerves and there were quite a few butterflies in my stomach on the first day of filming and at the audition before that too.. luckily, everyone working on the programme couldn’t have been nicer, and I settled in very quickly.’

ON RESEARCH FOR ROLE : ‘The production team arranged for me to visit a hospital to see how they really work, it was absolutely invaluable, and amazing to see the doctors and nurses work so well under so much pressure.’

BEST THING ABOUT WORKING ON HOLBY CITY : ‘Just working with such fantastic people, not just the cast but the crew as well. Who could ask for a better job, we just go around playing doctors and nurses. It’s never the same, every day is different.’

ON GLAMOUR : ‘Everyone is so good looking on Holby that sometimes I feel a bit out of place. I don’t think I’m glamorous at all. Blokes always see me as a mate, they never fancy me or think of me as a potential girlfriend. I worked in a nightclub for years an never got chatted up.’

ON HER ROLE AS A NURSE: ‘It really made me want to portray the part properly. I’d hate to think real nurses could watch the programme and dislike the way it shows their working life.’

WHO WOULD PLAY HER IN A MOVIE OF HER LIFE : ‘I like Emily Lloyd as an actress so I’d say her.’

MOST VIVID CHILDHOOD MEMORY : ‘When I was very young me and my cousin went to the beach in matching fish bikinis. I thought I looked the bees knees – they couldn’t get it off me.’

MOST FOOLISH THING DONE : ‘When I was about 16 I was swimming through ‘rapids’ in the local pool, and when I got out I heard all these boys whistling. I just ignored them – but suddenly I felt this breeze and there was this big gash in the bum of my bikini that had flapped down which was why they were whistling.’

WHO SHE ADMIRED : ‘Marilyn Monroe because I think she’s the epitome of a woman. She was fantastic and I don’t think there’ll be anyone like her ever again.’

WHAT MADE HER ANGRY : People who are rude or ignorant

ON HEALTH : ‘I’m not very healthy but I do try. I’ve started drinking a lot of water which I don’t really like. With acting there’s a lot of hanging around and you get bored and start thinking about chocolate.’

WHO MADE HER LAUGH : ‘Louis Theroux – he makes me howl! I think he’s hilarious and there’s something really attractive about him as well.’

OTHER WORK : Voice over work, appeared in a training video for Barclays Bank, and played ‘Reggie’ in the Roland Rat Roadshow.

* When Laura appeared in Six Characters in Search of an Author in the West End, the legendary Dustin Hoffman was so impressed by her performance that he came backstage to meet her.

* Laura didn’t realise she was getting paid for her acting till she was 12, but was glad her Mum didn’t tell her.