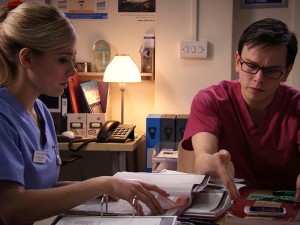 HOLBY CITY actors Lauren Drummond and newcomer Rob Ostlere talk to holby.tv about their characters Chantelle and Arthur. Could a relationship blossom between the quirky pair?

How does Arthur feel about Chantelle?

Rob: Arthur falls for Chantelle massively but he’s not got the skill set to woo her I would say! So it’s a bit back and forth for a while. They’re trying to manage a friendship and a professional relationship at the same time. We don’t know exactly what’s going to happen yet.

Lauren: Their relationship takes a bit of a journey. They’re two very sweet characters, who could get together but at the beginning there’s a bit of friction. Chantelle has often been the underdog and has had to prove herself. When Arthur joined the ward, she took him under her wing. He’s not so sharp on the people skills whereas in some ways he fills in her gaps with the medical or more academic side of life. They compliment eachother well. As for the romance side, they’re starting to touch on that now.

Rob: It’s also difficult because Chantelle has got this ex-boyfriend Rhys, who she’s still quite involved with and also Arthur has got the pressure going on with the F1 prize, so it’s a difficult environment to get anywhere with. It’s a classic situation in that they’re friends but one of them wants to be more than friends. How do you manage that when you’re working together? It’s difficult and made harder because Chantelle is so lovely.

Does Chantelle notice Arthur’s feelings towards her?

Lauren: I think she does eventually. In one episode he does this mix tape and it spells out her name. She borrows the tape for her drive home and realises the songs spell out Chantelle. She tells Arthur she thinks he’s a lovely guy but she can’t tell him that she doesn’t feel the same.

She loves Arthur as her pal and can always rely on him to help in certain aspects. But she’s still attracted to Rhys. For Chantelle, Rhys is some cool guy in Radiology whereas Arthur is her friend that needs her rather than her needing him. Although he displays some lovely qualities – all the things a relationship needs because she’s still young, she’s still searching for this ‘ideal’ guy.

Rob: There are some awkward moments between them both and it is an unbalanced relationship. But a lot of people have said to me that they want to see them get together.

Do you think she should give Arthur a chance, Lauren?

Lauren: I do eventually but not yet! I think he still needs to man up a bit! But also it would be boring if they got together straight away.

Rob: I think that’s the best thing – the build up, the will-they-won’t they. When I first joined, they spoke about Chantelle a lot and I got the impression they would get together quite quickly but I think they’ve been really good at pacing their relationship, which makes it more interesting for viewers to watch.

Lauren: We did have one scene that we had to re-shoot because they thought we were moving too quickly. Chantelle is pretending to play a patient that has to be told they have two weeks to live; Arthur has a moment where he leans in when he talks to her but the Producer decided we needed to step back and had to re-shoot the next day. I think that’s what’s great about Holby, in that they are very hands on and can do things to adapt like that.

How are you settling into the show Rob?

Rob: I’m really loving it! It’s such a great bunch of people to work with. I’ve said it to so many people that it sounds like a cliché but it’s really true. Everyone is welcoming and I am learning loads just from watching everyone.

When you first come into a show like this, you’re obviously a little bit wary but the directors are incredible. They have enough time to help you. They really take you under their wing and guide you along. And we get to mix with everyone; the production crew are only on the next floor up and the producers are open doors, so it is a great atmosphere.

Lauren: It is a real learning curve being here. When you’re working with people like Hugh Quarshie and Catherine Russell – we work with such brilliant actors, who have had such amazing careers. Not just their acting but also seeing their personality and attitude. They’re so disciplined without egos. That is what has been so lovely for me – we can learn from them and be inspired by them.

You do get that welcoming feeling straight away here so as a regular, you get a real chance to appreciate it all and have a real sense of learning. I’ve been acting since I was 14 and in this job in particular, everyone is so approachable.

Are there any similarities between your characters and yourselves?

Rob: I’d agree with that. Arthur can be quite awkward and tense and you do get that in real life when you’re nervous. There was a scene where I had lots of books, I dropped them by accident and they kept it in! And I can’t open curtains! Have you tried opening hospital curtains?! They’re a nightmare!

Lauren: I’m not as naïve as Chantelle. I think that’s what makes her lovely as she hasn’t been tainted. She’s started to grow up a bit but she’s still got a soft side. She’s not naturally ambitious; she just wants to be a great nurse. She’s conscientious whereas I am a bit of a worrier.

Being an actor is an insecure job and there are times I can get a bit insecure about things but Chantelle knows herself. She’s very moral though and I think we can share that. I come from a stable family; I’m close to my parents and brother so in that sense we both have that grounding.

Sometimes the way people speak to Chantelle, if they did to me, I’d say hang on a minute! She takes it more personally.

So we do share some similarities and that’s common as an actor. You do sometimes get cast as characters like yourself. When you do, it makes your job a lot easier! I was always a bit ashamed of that until I read something Meryl Streep said that when she gets a new part, she used herself and disembellished other parts of her personality. I think that’s the kind of thing you do as an actor; you’ve only got yourself as a tool. 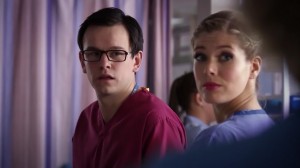 Lauren: Yes Chantelle made a mistake. She’s human but it was because of circumstances that made her mistake and she tried to do everything to reverse it and help Serena’s mum. I think Serena doesn’t want to blame Chantelle but she has to blame someone and uses her in the firing line. Chantelle questions herself a lot but with the support of Ric, Arthur and even Hanssen, she will get through it. I’m glad it has a happy ending because it would’ve been a shame to make an example out of her.

Rob: It’s a huge pressure when top people are coming down on you and with it being a personal situation for Serena; it was made a hundred times worse.

What else is coming up for Arthur?

Rob: His relationship with Chantelle is at the forefront but he’s also facing pressures going for the F1 prize against Gemma. It’s an important prize which can make the difference between you staying on and your career advancing. The stakes are so high, not just in your career but people’s lives.

Arthur is also not really equipped to deal with people as he has a problem engaging with them, so that’s where Chantelle can help him. It’s up and down for him; when he does well, there’s pressure and when he does badly, there’s even more pressure!

Do you all get on well as a cast?

Lauren: Absolutely! When I first started, everyone was a bit older in the sense that they had families, etc so we didn’t get to go out socially much. But now lots of us go out together. We’ve attended Jimmy Akingbola’s Tri-Force monologue slams, which help people get into the industry. I also like to organise theatre trips out.

I’m also really good friends with Tina Hobley. We’re actually related as our grandmothers are cousins. I’ve stayed with her in the Cotswold and we’re trying to go to Ireland this year.

In this article:Lauren Drummond, Rob Ostlere

Former HOLBY CITY actor Rob Ostlere will be appearing in ‘Sweet Bird of Youth’ at the Chichester Festival Theatre from 2nd – 24th June....

Following on from his departure from Holby City earlier this year, actor Rob Ostlere is heading into theatre this Autumn. Rob will be appearing...