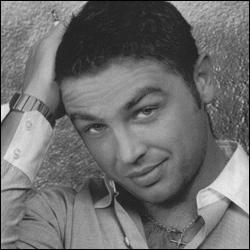 ON SIMILARITIES WITH TONY : ‘I think I’m as cheerful as him – most of the time.’

ON TONY’S BEST AND WORST TRAITS : ‘He is calm and considerate, a tough nut with a heart of gold, but his worst trait has been his temper. He has been in prison for GBH and now he is trying really hard to keep things under control – he wants to stop turning green and ripping his trousers!’

REAL LIFE CASUALTY EXPERIENCES : ‘Walking in the Brecon Beacons I fell over the edge of a cliff and landed on a rock, head first. When I clambered out I was covered in mud, but drove back to Cardiff and decided to get changed thinking ‘I can’t go to hospital in this state’; I was obviously in complete shock. When I arrived at the hospital, dressed in black with blood all over my head, all the staff started singing the Milk Tray ad music whenever they came near me. They just didn’t believe what had happened!’

FAVE FOOD & MUSIC : ‘Food? Anything by Nigella Lawson. I’ve got the world’s biggest music collection, with everything from Ray Charles and Van Morrison to Wyclef Jean.’

HOW HE KEEPS IN SHAPE : ‘Spinning classes and weights at the gym – or running round t’hills as ‘ome!’

HOW HE RELAXES : ‘Sitting at home with a nice glass of red wine and mellow music.’

HOLBY CITY APPEARANCE : Lee appeared in a number of episodes of HOLBY CITY during Year 5, as Tony Vincent – in an interlinked storyline involving his relationship with HC midwife Ben Saunders.

TELEVISION CREDITS : Bob and Rose; Where the Heart Is; Hope and Glory; Clocking Off; Queer as Folk; Wing and a Prayer; Coronation Street; Casualty; Holby City; MIT Murder Investigation; Heartbeat; Family Affairs; Wire in the Blood; Hollyoaks – In the City; The Royal Today

THEATRE CREDITS : Passport to Pimlico; The Holly and the Ivy; Romeo and Juliet; The Soldier’s Tale; Darwin Project; Richard III; The Golden Age

* Lee once campaigned against the building of the Mottram link road near his quiet village home, ‘I joined a protest on the zebra crossing, not letting cars go past and we’ll continue to fight until they change their minds.’

Lee is now focused on script writing and development. He worked as a development producer at Coastal Productions, writing storylines for series such as Wire in the Blood, and he spent nearly three years working as a core member of the story and script editing team on Shameless. He is currently developing a number of original series ideas.