(to Susie Mercier) What have you done to it this time?

In the early years, Cathy described Duffy as a ‘faceless nurse with a bedpan’. She was newly qualified, with a strong country accent, care free, with an interest in astrology, yo-yo diets, gossiping and trying to pass her driving test. But she was always shown to be a tough, determined woman (eg. when she held a demonstration for the hospital). She was always cheerful, until she was raped in S1E11 – she didn’t go to the police, but regretted it. She confides in Megan, and the team help her through her ordeal.

In S2E2, the past catches up with her, when she recognises the man who raped her, when he is brought in after being stabbed – he dies, and she is not sad. Duffy’s first boyfriend is Peter, who ends up being HIV, she leaves him. Later she finds out from his sister that he has died in a car crash. Charlie helps her to visit his graveside, so that she can come to terms with it.

In Series 4, she is promoted to Sister, she is tough on junior staff. She is dating Dr Andrew Bower, and in S4E4 finds out she is pregnant. He is shocked, but happy – but she tells him she doesn’t love him and will bring the baby up on her own.By Series 5, Duffy’s had a baby boy, Peter – she finds being a single Mum hard, and has childminding problems, and is even forced in S5E8 to bring Peter into work.In Series 6, she has to cope with the suicide of student nurse, Kelly Liddle – she feels responsible, for pushing her too far. Meanwhile her new boyfriend, Paul Slator, pushes her into leaving nursing, but she refuses and leaves him.

In Series 7, she fears she has cervical cancer, but after a long wait, tests come back negative.

By S17E13, Duffy gets in touch with Andrew, and in S7E16 he gets a job as Locum Consultant in Holby A&E and meets his son. They rekindle their romance, and reveal to be getting married in S7E24.

In Series 8, Duffy is happily married and announces her second pregnancy, she leaves on S8E13.

Duffy returns four years later, at the end of Series 12, for Baz and Charlie’s wedding. She comes alone, and reveals her marriage problems to Charlie and her fears that Andrew has had an affair.

She returns to Holby A&E in Series 13, as an agency nurse, but applies for a full time position, which she gets – Charlie is glad to have his old friend back in the team.In Series 14, Duffy finds out that Adam is applying to be a nurse, but is also HIV. In Ep.5, she tells him of her experiences of HIV, but that she isn’t happy about the strength of the department being jeopardised by having a HIV nurse on the team. In Ep.6, Duffy complains to Max that her car isn’t working properly – he offers to look at it for her. But when he does, decides to call out a mechanic instead. When he later gives her back her keys, saying she owes him a drink – she tells him she knows he didn’t do the work himself. Adam does well to help out a patient but says that although he was good, there’s a difference between helping out and becoming a full-time staff member. In Ep.7, Duffy gives Chloe advice, after she decides to have an abortion. Duffy tells Max she owes him a meal after getting her car fixed – he asks if Andrew will mind. She remarks its his turn to baby sit. In Ep.8, Adam starts his first day as a nurse – Duffy tells him she’s not as prejudiced as he thinks but to make sure he’s careful. In Ep.10, Duffy is interviewed for the post of Sister by Charlie and Max. Charlie tells Max not to give her any preferential treatment just because she’s an inside candidate; Max is offended. Max is then deliberately harder on her in the interview. Duffy visits him later to question his behaviour – he says he didn’t want Charlie to think he was biased, but that she’d got the job anyway. He also wanted to make Charlie think there was nothing between them, she questions him about their ‘relatonship’ and they end up kissing on Max’s desk – Charlie spots them through the office windows. Next episode Charlie is sharp with both of them. Max wants to see Duffy more and she tells Andrew that she has to work late. In Ep12, Max wants to see her again, but she tries to remind him that she’s married. She then asks Charlie if she got the Sister job on merit – he says she should know him better than that and remarks that he’s adept at separating the professional from the personal – Duffy realises he knows about her and Max. Charlie reminds her about what she’s doing and that she is married with children, and could lose everything. Max turns up with tickets to a concert – she turns him down saying she has to go to her family. Later, Charlie apologises to her but says he only said something because he cares about her as a friend. In Ep.13, Max asks Duffy out for a drink, again she refuses and says she wants to end it before it gets to complicated. Max angrily confronts Charlie. In Ep.15, Max has been avoiding her – she asks him if he will stop, otherwise it’ll make working together hard and asks that he apologises to Charlie. In Ep.18, after a New Year shift, Charlie asks Duffy is she wants to get dinner. Her look tells him no and they both smile. They joke about being another year older but no wiser, just more sensible. Duffy kisses Charlie quickly before heading off. In Ep.19, Duffy is annoyed when she finds out Tina is now dating Max and confronts her. But they all pull together for support when Max’s son is killed.

In Series 15, Duffy is struggling to cope in A&E without Charlie, who has been off after suffering a pulmonary embolism. She also decides to employ ex-alcoholic Spencer as a Health Service Assistant. Next episode, Charlie is back at work – Duffy is worried about his health. In Ep.3, Charlie confides in Duffy that his son is going to Canada to be with Baz. In Ep.10, Duffy comes back to work after a romantic weekend away with her husband, but is reeling from his shock announcement that he’s returning to work at Holby A&E – and she was the last to know. In Ep.11, Duffy tries to keep her 40th birthday quiet but Charlie has other ideas. He arranges a surprise birthday party for her at the pub. In Ep.12, Andrew joins the team – he makes a good impression but Duffy is not keen on his appearance at A&E. In Ep.14, Duffy confides in Colette that she thinks she may be pregnant. She’s worried how Andrew will take the news. Next episode when she takes a day off sick – Andrew has no idea that she is suffering morning sickness – Colette does her best to cover for her. In Ep.16, Duffy is sure that Andrew will be horrified at the news of her pregnancy. Then she has to work with Andrew on a 6 months pregnant woman who has been in a car accident. Andrews’s sensitivity makes Duffy believe he will feel positive towards her pregnancy and decides to break the news – but his reaction is not what she had hoped for. In Ep.20, she tells him she will have the baby no matter what. Andrew’s attempts to smooth things over, make it worse. In Ep.26, Colette finds Duffy in the toilets losing blood, worried she’s had a miscarriage However next episode, she is in a ward – Andrew visits her and says the incident has made him realise that he wants the baby too. In Ep.31, Duffy learns that Andrew has chosen to work in another hospital after turning down the Consultancy post at Holby. Although initially hostile towards him she discovers he’s putting their marriage first for once and is overjoyed. In Ep32, it’s Duffy’s last day before she goes on maternity leave and it appears her and Andrew have worked out all their differences. In Ep.36, Holly has gone missing and her stalker Tom is believed to be around. Andrew goes to his car to fetch something but bumps into Tom – Tom then pushes him down the steps. He is taken into CRASH where he dies. Charlie tells a heavily pregnant Duffy the heartbreaking news.

In Series 16, in Ep.1, Charlie visits widower Duffy at home with her two sons, Jake and Peter, when she unexpectedly goes into labour. She refuses to go to hospital because Andrew died there and Charlie is forced to deliver her baby boy, with some complications. In Ep.5, Duffy comes in with her new baby boy, Paul. She is miffed to find things are running smoothly, with Colette in her place. In Ep.10, Duffy is welcomed back with flowers by the team. She is late, stressed and not happy with Colette, who has made changes in her absence. Charlie’s friend Leona comes in with her baby daughter, Charlie – Duffy is concerned about the welfare of her baby. She also advises a father, whose young son accidentally shot his mother dead. Later Duffy breaks down infront of Charlie, as she misses Andrew – Charlie comforts her and says he will be there for her. In Ep.11, Duffy is miffed she didn’t know about Jan and Charlie’s relationship. In Ep.12, she tries to persuade parents to go ahead with their daughter’s operation for her appendix. In Ep.13, an old colleague, Susan Crown, of Duffy’s, causes a stir when she refuses to help out in certain A&E procedures. She also tries to persuade Duffy to do agency nursing. In Ep.15, a young boy, Scott, is brought in by his mother after he breaks his arm, after falling of stage for the dress rehearsal of his nativity play. Duffy treats him and Scott reveals that it was Duffy’s son, Jake, that pushed him off stage. Duffy talks to Jake when he arrives in A&E, who upsetly tells her Scott was making fun of him about his father’s death. Charlie comforts Duffy who is concerned her family aren’t coping. In Ep.19, Duffy stands up for Anna, when Locum Consultant Philippa bullies her. In Ep.21, Duffy arrives in late, and is then called away when her babysitting mother calls in unwell. Duffy tries to flag a taxi outside – but hairdresser, Viv, pushes her aside and takes the taxi. The taxi driver ends up attacking Viv. Duffy, forced to bring baby Paul into work, receives a warning from Jan but shouts back she had no choice, that the hospital should have a crèche and that the only reason she doesn’t do agency nursing is to loyalty of the staff. Max, has a go at her too, until she breaks down in tears – after thinking it could have been her on a hospital bed not Viv. In Ep.37, Duffy, on her way to her Mum’s to drop of baby Paul, before her shift, nearly runs over a confused pregnant woman, Melanie. It is clear she has been raped, and Duffy brings her in. Lara and Duffy treat her, and Lara decides to call the police, ready incase she wishes to make a statement. Lara urges Melanie to get help when she admits her husband raped her, but she refuses and Duffy accuses Lara of becoming too emotionally involved. 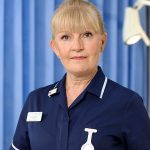 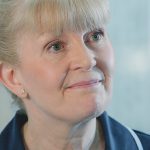 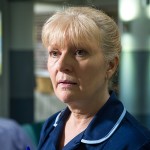 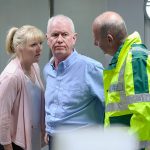 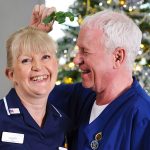 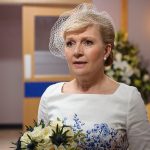 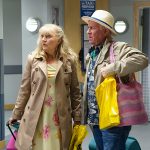 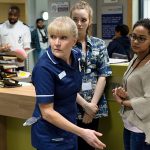 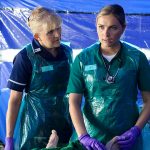 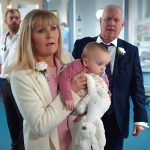 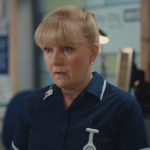 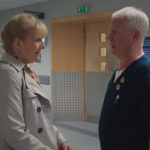 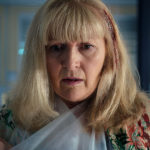 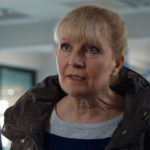 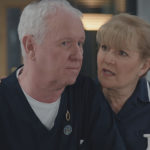 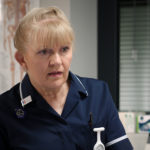 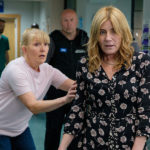 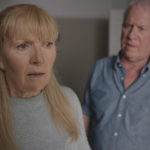 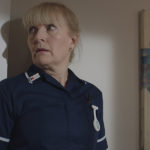 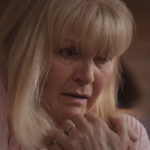