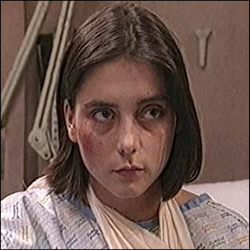 STORYLINE : Anorexic Fenella is brought into A&E with her over-pushy mother. In the toilets she takes an overdose, and dies in CRASH.

STORYLINE : Kathy is brought into A&E after her house has been burgled and she has been raped. It later transpires she got a friend to stage the burglary, but didn’t count on the attack