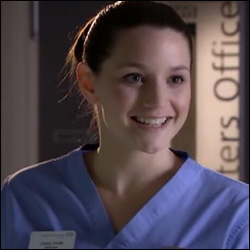 Young Welsh nurse Lleucu appears from Series 13 but isn’t involved in any major storylines till Series 14.

She becomes good friends with Chantelle and in S14 E18, Chantelle desperately wants her Valentine to be the doctor of the same name, but misinterprets Lleucu’s good intentions when she sees the young nurse whispering in Oliver’s ear. In S14 E21, Chantelle upsets Lleucu when she books a holiday to Ibiza with the girls instead of laying down a deposit on a flat that she’s planning to share with her colleague. Lleucu gives Chantelle an impossible deadline, which causes a huge rift between the two women. In S14 E24, Lleucu is excited about moving in with Chantelle but doesn’t know that the move in date clashes with Chantelle’s Ibiza holiday (which she thought Chantelle had cancelled).  Once the truth is revealed, the pair argue infront of a patient. Ric tells them off for being unprofessional, whilst the patient advises Chantelle to invite Lleucu on the holiday with her.