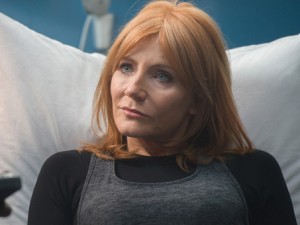 A new love interest is set to stir things up in the ED this summer as Michelle Collins joins as a guest lead in  Casualty.

Starring as Samantha, viewers will meet Michelle’s glamorous character in July after she’s injured trying to help rescue a competitive father who suffers a heart attack, following a head-to-head race with his son.

It soon becomes clear that Samantha has found something positive from her injury, as she continues to flirt with her knight in shining armour, Paramedic Jeff (Matt Bardock), who treated her at the scene.

But as the relationship with Jeff blooms, a secret held by Samantha threatens to turn both their worlds upside down.

Commenting on her role, Michelle Collins said: “I got offered the guest role in Casualty very soon after finishing Corrie, I jumped at the chance of playing a character so different so quickly, it was exciting to be stepping into something new. Playing Stella was great fun but it was thrilling to have a challenge of an entirely different role; Londoner Samantha is nothing like Stella, I dyed my hair to leave Stella behind which fitted in well with the role.

“I’m pleased to be involved in another hit drama TV show so soon, even if it’s just for a short while. Since leaving Corrie it’s been great to get my teeth into different characters and I’m looking forward to new opportunities which have been coming my way.”

Oliver Kent, Executive Producer, added: “We can’t wait for everyone to meet Samantha and see where her story goes over the two months she’s on screen. Michelle has been absolutely brilliant and her arrival is set to have a huge impact on one of the show’s most loved characters.”