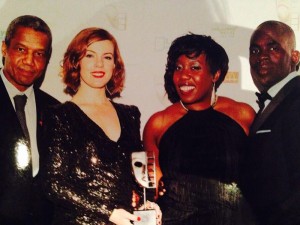 HOLBY CITY came away with two awards from this year’s MVSA Awards which took place on Saturday 2nd November at the International Convention Centre in Birmingham.

On Twitter, Louis said of his win ‘Thank you to everyone who voted for me for best emerging talent 2013 for the mvisa awards can’t believe I won over the moon!!’

The MVSA Awards; Movie Video and Screen Awards is now in it’s 7th year and aims to support people of colour by identifying and rewarding the creative talents of those individuals who have contributed to the Film, Music, Television and Theatre industry.