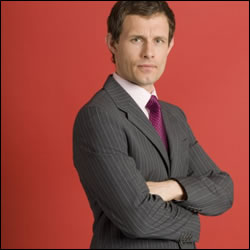 (Harry comes to introduce himself to Nathan)

Nathan : Nice to meet you, how are things?

Nathan Spencer is very sharp, driven and abrupt. He has come from a business background and only really cares about the hospitals efficiency rate. He lacks empathy towards the staff and how they do their jobs.

We are first introduced to him, as is Harry, in S20 E15, when he starts work. He ruffles Harry’s feathers with his new rules and regulations. The pair clash and Nathan tells Harry that if he cannot co-operate he will find a Clinical Director who can. Nathan continues to put pressure on Harry and his staff to keep by the four-hour rule. In S20 E16, a wheelchair bound man has donated £20,000 to the department. Nathan plans to invest the money into management not vital equipment needed for the hospital and when the man finds out he confronts Nathan. The staff meanwhile are unhappy with Harry who is now enforcing his rules so strongly. In S20 E18, Ellen hatches a plan, so that Harry is provoked into defending his actions against Nathan and getting his department to realise the pressure he is under. It works and Nathan is also made to realise what kind of work they do when he witnesses a procedure being carried out in resus and has to leave when it’s too much of a sight for him. In S20 E21, Harry has to treat Nathan’s mum, Peggy, in under 4 hours whilst a journalist is let loose in his department. Nathan’s mum had slipped at home, injuring her wrist. Being a busy day, the pressure mounts and a mix-up with x-rays leads to Harry messing up Peggy’s treatment. In S20 E22, Nathan and Harry clash over the article quoting a hospital source in The Gazette. Nathan is back to visit his mother who has had another fall. Nathan accuses Maggie of speaking to the press, which she vehemently denies – Bruno set her up. Meanwhile, Nathan asks Selena out and she turns to Maggie for advice. Selena then asks Harry out, but he turns her down. Later in the shift, Selena agrees to go out with Nathan. In S20 E23, Nathan and Harry spar again over the hospital and how Harry conducts his affairs. In S20 E24, Nathan is angry at a sponsor pulling out funds for the hospital and blames Maggie. In S20 E25, Nathan apologises to Maggie following Bruno’s recent arrest. Maggie calls in a favour and asks if they can set up a hep b immunisation clinic. Nathan and Selena have been dating, however things become frosty when Selena has a tough Police Surgeon shift. She asks Nathan for a hug but he refuses because she has blood on her. She walks off alone. In S20 E29, Selena decides to end her relationship with Nathan, feeling he is unable to give her the emotional support she needs. However she is shocked when he later acts like it was him that ended the relationship. In S20 E30, Nathan’s strange behaviour towards Selena at work makes her feel uneasy – he claims to be doing a patient/ staff interaction survey in the department, but Selena isn’t convinced. In S20 E31, Selena is still concerned that Nathan is stalking her. Together with Maggie, she raids his office and they are shocked to find CCTV footage of Selena. Nathan catches them but he has an explanation for his actions; claiming he is planning to increase security measures in the department. In S20 E32, new CCTV cameras have been put in place but Selena is still suspicious of Nathan, thinking he is just covering his tracks. Meanwhile Nathan holds a meeting for staff but is annoyed when barely anyone shows up. In S20 E40, Nathan is frosty towards Maggie on her first day in her new position. He calls in on Harry and says funding for her Consultant’ post is now not being made available and leaves Harry to tell her the bad news. Maggie is furious when next episode S20 E41, a different position comes up despite her job cut. Selena at first stands by her friend and has a go at Nathan, but later decides to go for the job. In S20 E42, Tess and Nathan clash over the new cleaning company as the emergency department is in such a mess. Nathan wants to cut costs but pays the price when he pricks his finger on a discarded needle. In S20 E43, Nathan, furious about his needle-stick injury, is determined to find out who is responsible. He angers Maggie further when he closes down the hep b clinic. In S20 E44, Nathan manipulates a confused [ID 1347]Sam[/ID] into admitting he did not dispose of the needle correctly, Charlie is furious to find a tearful Sam packing up his locker and tells Nathan he is a bully. The staff all protect Sam and Nathan is forced to back down. In S20 E47, Nathan encourages everyone to make sure the department runs smoothly to impress the visiting Chief Executive. However, friction between Guppy and Harry regarding the treatment of an overweight patient shows the hospital in a bad light. Nathan ends the day feeling stressed and makes a shocking confession to Selena that he is HIV.

In S21 E3, Nathan is continuing to worry about his future and becomes distressed when he cuts himself. Selena convinces him to take a blood test and he is glad to have her on his side. He is relieved when Selena informs him that his HIV result is negative. The pair later kiss in his office. In S21 E4, Selena and Nathan are back together, but she wants to keep it from her colleagues. Nathan tries to undermine Harry by offering him a position which he would share with Selena. This plan backfires when it brings the friends closer together, which makes Nathan jealous. In S21 E5, Selena’s attempts to prove herself in her new position alongside Harry are causing more harm than good, and matters aren’t helped when Harry finds Selena kissing Nathan. In S21 E9, Nathan announces that he has just received a call from the trust; Holby ED is to close which leads to the staff’s fight to keep their hospital open. Nathan attempts to help but in S21 E12, when he is offered at job at the new Super ED – he puts his own needs first and makes a decision to accept a job move, thus supporting Holby’s closure. In S21 E14, devious Nathan hires an undercover journalist as an agency nurse to help him bring about the downfall of Holby Hospital. However, his plans are foiled when Charlie becomes suspicious. In S21 E16, Nathan discovers Josh in the back of an ambulance after being stabbed and alerts the team. In S21 E19, Nathan’s mother, Peggy, causes havoc for her son when she locks a delivery driver in her bedroom and he then collapses at her home. Whilst in the department, Selena is shocked when Peggy has only bad words to say of her son. But she is in for more surprise when Nathan later comes into her office and proposes to her. Harry has decided to stand for election in a bid to stop the hospital’s closure. In S21 E20, Harry acts on Maggie’s advice that he needs to be more personable if he wants to succeed in his election campaign when he comforts a distressed Alice – but Nathan sees an opportunity he can’t resist. Next episode in S21 E21, he persuades Alice to make a formal sexual harrassment complaint against Harry and suspends him, in the hope it will hinder his chances of being elected. Meanwhile Kelsey is forced into taking desperate measures by working as a prostitute, but it leads to a nasty surprise when her first client happens to be Nathan. In S21 E22, Nathan tells Kelsey that he won’t tell anyone she is moonlighting as a prostitute if she keeps quiet about his visit to the brothel. However Kelsey realises he has more to lose than her and blackmails him into paying her nearly £3000 to keep quiet. Whilst an oblivious Selena finally accepts his marriage proposal. In S21 E23, Kelsey agonises over whether to tell Selena the truth about Nathan as their wedding approaches. Still feeling regret over making the claims, Alice looks into Harry’s confidential file to see if Nathan’s story that others had complained against him are true but is upset to find out he was lying. Selena happens to find out what she is doing and is shocked when she learns of Nathan’s deceit. Selena confronts Nathan who says he did it because of the new job he was offered and promises there will be no more lies between them. But Kelsey decides to confront Selena with the truth. Distraught Selena tells Nathan it’s all over. In S21 E24, staff are delighted to learn Harry has won the election at Selena warns Nathan that he should start making more friends now. Meanwhile Nathan threatens Kelsey and says he will reveal her secret to gain revenge and unless she pays him back. Kelsey says that she doesn’t care as everyone would be interested to find out how he knows that she is a prostitute. In S21 E26, Nathan puts the mockers on Selena’s romance with Harry (whom she spent the night with before he left for his new job). He claims flowers Harry sent are from him and deletes Harry’s text from her phone.