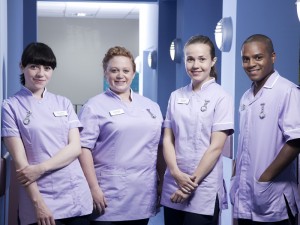 Casualty is set to introduce four new cast members through a webisode and cast Twitter accounts giving fans an in insight into the lives of the newest recruits before they enter the ED.

The special Red Button episode will also welcome the series back as it goes deeper in to the disaster that faces its newest recruits on their first day.

Available from today on the official BBC Casualty website, the webisode, Nurse Factor, will welcome student nurses, Ally, Aoife, Jamie and Amanda as it follows them on the night before their first shift.

Messing about, the nurses use their camera phones to interview each other about their final training placement and their fears of working in a busy ED.  The three friends and colleagues take a picture to mark this momentous occasion – as they enter the fast-paced world of emergency medicine, who will survive?

Additionally, Twitter accounts have been set up for each of the characters, allowing fans to follow their favourites as tweets appear alongside the show’s Saturday evening broadcast.  This will give a dramatic insight in to what those characters are feeling as they make their way through their first few days.

Meanwhile an extra dose of Casualty will be available via an exclusive Red Button episode that will air immediately after Casualty: Rabbits in Headlights on 5th January. Gone in Sixty Seconds, follows Jeff and Dixie as they arrive at the scene of a coach crash, bringing a school party back from a skiing trip, as they struggle to save three trapped teenagers.

Johnathan Young, Executive Producer, said: ‘The Red Button episodes have proved extremely popular with our audience and are a great way of exploring characters in-depth.  The webisode is something that we haven’t tried before, but with the Twitter accounts for the new student nurses and a focus on social media it seemed to fit.  This will be a great opportunity for fans to get to know them before the chaos of the ED.’

Available to watch at: BBC Casualty

The student nurses can be found Tweeting at: