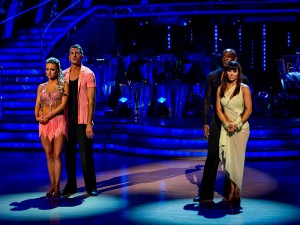 Despite a strong performance this weekend, Patrick Robinson found himself in the dance off .

Patrick danced the Rumba to ‘When I Was Your Man’ with his dance partner Anya Garnis. The couple scored 36 points and after coming second in ‘Swingathon’ were up the leaderboard in joint first place. However Patrick was up against Ashley & Ola in the dance off.

Three of the judges chose to save Patrick which sees him make next week’s semi-final, however judge Len made the point of saying if the decision was down to him, he would have chosen Ashley to stay based on the final performance.

For more information and clips you can visit the official BBC Strictly Come Dancing website as well as sign up to cast your votes for Patrick online.

holby.tv urges it’s fans to show their support for Patrick next weekend and get him a deserved place in the final.