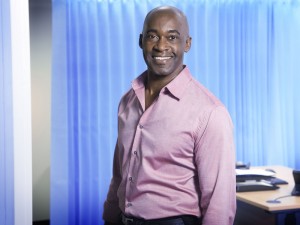 Fans delight at the return of Ash

Stalwart fans of CASUALTY will be thrilled to learn that actor Patrick Robinson is to return to the show in his role as Martin ‘Ash’ Ashford.

Patrick played fond favourite nurse Ash between 1990-1996, as well as making a brief 2-episode return for Charlie’s wedding in 1998. However things have now changed for Ash, who has retrained as a doctor and returns to Holby as the new Locum Consultant, following Nick Jordan’s recent departure.

Patrick is thrilled to be back in his iconic role, ‘Recreating a character that has moved on and changed so much is challenging and this feels like a totally new job. But to be back working with Derek Thompson (Charlie), I feel I’ve come home.’

Executive Producer Johnathan Young added, ‘We’re thrilled to have Patrick back. Ash was a hugely popular character and reuniting him with Charlie will reignite a friendship that we hope will delight viewers old and new. With many years of nursing under his belt plus a stint working as a doctor in America, Ash brings a unique perspective to the ED that will challenge Zoe but charm the rest of the team.’

Patrick returns on Saturday 9th February – check back soon for holby.tv’s interview with Patrick on his comeback…