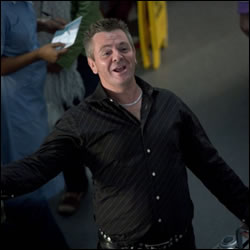 STORYLINE : Dee Bradford is brought into the ED, with her boyfriend Kenny, after collapsing at the airport. She is suffering kidney failure and reveals to Harry she doesn’t want to go through dialysis or a third transplant operation. Kenny is angry and hurt that she has given up hope. Eventually Dee decides to continue with her treatment but on two conditions.