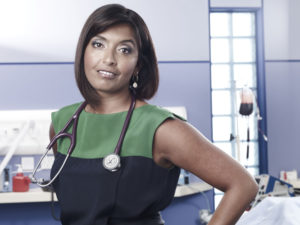 Casualty is set to air an exclusive Red Button episode on Saturday 15th December directed by the show’s own Sunetra Sarker (Zoe).

Available via the Red Button immediately after Casualty: I Saw Mommy Kissing Santa Claus, the episode entitled Mistletoe and Rum will see the nurses of Holby ED on a Christmas night out, while exploring the continued chemistry between Fletch and Tess.

The exclusive episode begins with Fletch rushing to finish a phone call to his family, so he can get back to the party. As he hangs up he meets homeless but proud Tyron, who tries to convince a dubious Fletch the importance of making the most of every minute with his young children.

In the pub Charlie is thanking all of the nurses for their work this year, just as everyone hits the dance floor.

Spotting an opportunity Fletch and Tess step outside the pub for some air, where cheeky Tyron asks Tess for a kiss under the mistletoe.  But the combination of diabetes and living on the street sends Tyron into a hypoglycaemic coma leaving the nurses battling to keep him alive.  Will it be a happy Christmas for everybody?

Meanwhile fans will be in for an extra treat as behind-the-scenes footage of the making of the Red Button episode is made available on the official Casualty website.

Jonathan Young, Executive Producer, said: ‘We wanted to take a closer look at a storyline that is set to escalate in the New Year between two of our most popular characters, Fletch and Tess.  The Red Button episodes provide an ideal opportunity to do just that and to give something extra to our fans.  And with the fantastic behind-the-scenes footage of Sunetra directing, we can’t wait to see the reaction!’

Sunetra Sarker, Director, said: “Moving from in front of the camera to behind presents so many different challenges.  What I found most refreshing was the respect and trust that everyone gave me as a director and the chance to collaborate with each department in detail. The cast gave me top performances and I had total crew support.  This is a slice of the nurses Xmas night out focusing on Fletch and shows the nursing team off duty down the pub. It’s a treat for all the fans that follow the show.  I was thrilled to be able to make it.”