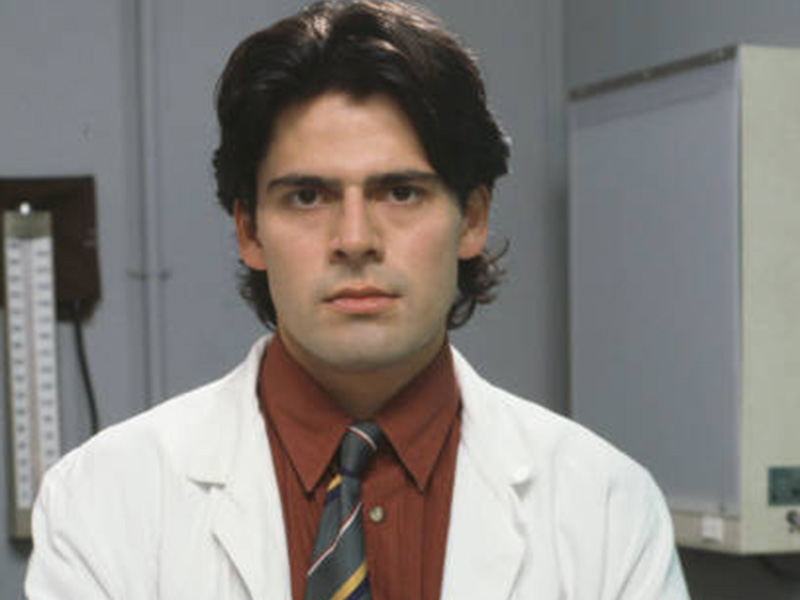 (to Maxine) Junior doctors are like prisoners of war under the Geneva convention – sleep deprivation suffers, classified as torture

Part-Iranian SHO Rob Khalefa was attractive, with an attentive bed side manner. He was academically brilliant but there were pressures for him to succeed after his father, who was a surgeon. A&E was Rob’s first experience, which clearly showed, he was at first careless about getting things wrong and panicky under pressure, and was nervous, but his nerves are mistaken for arrogance, which doesn’t go down well with the staff around him.

Rob arrives in Holby in S7 E1, telling Maxine that doctors are ‘like prisoners of war’ and he is already flirting with patients – Julian sees him being given a phone number from patient Maggie and he’s not impressed. Rob makes his first mistake on a patient injured in a car, when he fails to insert a second drip and notice his fractured pelvis. Julian angrily shouts at him ‘Well done doctor you’ve been here less than a week and you’ve nearly succeeded in killing one of your first patients.’ – which doesn’t do his confidence any good. At first Rob, is seen to be unable to treat patients sensitively, including a teenage girl in S7 E3, who after being abused by her mother’s boyfriend, has tried to end her pregnancy. He later treats a body builder, who Rob finds has been taken steroids – he dies and they find he was discharged twice before his collapse. In S7 E9, an unpleasant asthmatic man is brought in after an acute attack. At a busy time, Rob is called away and tells Sandra to set up an intravenous drip – something she is not allowed to so. Maxine however fails to pass on the fact that he is allergic to penicillin and his condition worsens. When conscious he threatens to sue the hospital and Sandra faces disciplinary action. In S7 E10, Rob denies he instructed Sandra to inject the man, but she says he pressurised her into it. Things get heated and frosty between them, further when a teenage is brought in unable to breath. Rob believes she is just drunk, but Sandra thinks she has taken something and seeks Julian’s opinion. Julian turns up on his day off – Sandra is right, the girl has taken ecstasy. Rob accuses Julian of being unprofessional in his relationship with Sandra. In S7 E11, it’s Rob’s day off and he takes a private boat trip with his girlfriend Natasha, and his father’s friend Bart and his wife. The boat hits choppy waters and crashes into a bank due to Bart’s mishandling. Rob tries to save Natasha who is swept away by the waves. In A&E Rob is very upset – Julian tries to comfort him in the toilets, where Rob cracks under the pressure and admits he is finding it hard o cope being a doctor. Natasha is brought in, and although poorly, survives her ordeal. At Christmas, S7 E15, Rob discharges a young homeless girl Suzie, who wants some warmth for the night, much to Maxine’s annoyance. Suzie tells him she will make herself ill and runs off. She is later brought in after running infront of an ambulance. She has an operation to save her arm, but is cheered up when her long lost father arrives to see her. Rob and Maxine share a kiss in the staff room, and he has fun playing with his new toys – a game boy and a water gun. In S7 E18, Rob and Sandra are called out after a farmer suffers a tractor accident – they are unable to save him and he dies in CRASH. In S7 E21, Rob treats a woman who arrives with her partner. Displaying symptoms of a rare condition Gwym Barrie – Rob is happy at discovering it, but Mike finds out she is faking pains, and Rob is disappointed. As the couple leave the hospital, we discover their real intentions – they have stolen drugs and hospital equipment. In S7 E22, a rent boy comes in after being gang raped, beaten and dumped on a roadside. The teenager won’t speak, but Rob discovers his injuries and tries to persuade him to go to the police. In S7 E23, Rob finds out he has landed a job in General Surgery in Southampton and celebrates his last day in the final episode of Series 7. The team play a prank on him, with a blow up doll and give him champagne. Rob is also surprised when [ID 362]Simon[/ID] gives him a going away present – a diary with his initials inscribed on them. It’s a busy last night in A&E, when youths run amok and set Holby hospital on fire. Everyone rushes to get out but Rob lingers to take out an old man, who is already dead after being attacked, out of the building. While there a second explosion causes the roof to collapse with him inside. Fireman bring him out, where Mike tries to save him, he’s in a critical condition, but Mike says ‘he’ll live’. Next series it is revealed he thankfully survived.