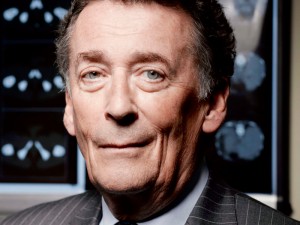 Playing the lead role of Hercule Poirot, Robert will be touring the UK from 6th January – 19th July 2014 in the Ben Kenwright production.

The play describes; A quintessential English country estate is thrown into chaos following the murder of eccentric inventor Sir Claud Amory, and the theft of his new Earth-shattering formula. Arriving at the estate just moments too late, one man immediately senses a potent brew of despair, treachery, and deception amid the estate’s occupants. That man is Hercule Poirot.

In the first play ever written by Agatha Christie, we are introduced to a character who went on to become the most famous detective of all time and the only fictional character ever to receive a full-page obituary in the New York Times.

Robert Powell is known to HOLBY viewers for his role playing nurse Mark Powell between 2005-2011. Having received multiple awards and a BAFTA nomination for his portrayal of Jesus in Franco Zefferelli’s Jesus of Nazareth, he went on to star in numerous film hits including 39 Steps, Four Feathers and Shaka Zulu, and also featured in several other TV series including The Detective. His extensive stage performances include roles in the national tours of Alan Bennett’s Single Spies and Jeffrey Bernard is Unwell before most recently appearing in Singin’ in the Rain at the Palace Theatre in the West End.

Former HOLBY CITY actor Robert Powell will be appearing at the Theatre Royal in Bath next year. Robert will appear alongside Liza Goddard in...

Established actor Robert Powell joined the cast of HOLBY CITY in February of this year as Mark Williams, the ex-husband of Tricia and the...