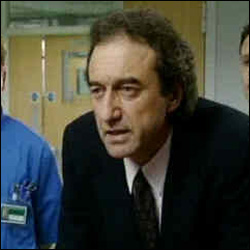 Carl comes up to Darwin, looking for Jasmine. He’s been phoning but she won’t talk to him. Eventually she decides to and he says he wants them to get back together. She says they’re not suitable for each other and gives him her ring back. They say they’ll miss each other.

Victoria winds Sunny up and tells him in enter a radio competition in which he can win £10,000. He gets through and answers five questions correctly so wins the money. He’s disappointed however when he’s asked which charity he’ll be donating the money to, and gives it to the cardiology unit.

Meanwhile on cardiology, Kirstie’s decided to stay on McKendrick’s team and says she doesn’t want to go into surgery. Nick wants to know why she stood him up and she says she was feeding a dog. Nick says that he’s there if she needs a friend to talk to..

Nick and Meyer successfully perform a rare operation to cure an elderly patient of the whole in his heart. His younger wife is very concerned and the patient, Ken, tells her to leave him. After the operation, however, Hannah tells Karen that Ken needs a wife and not a daughter. She says she’ll look after him until he’s better and then get a divorce if he still wants one.

An ex-nurse of Muriel’s is on the ward and she wants to help out. She even tries to resuscitate a patient without calling a nurse which Kirstie reprimands her for. Muriel wants to fit her with an internal defibrillator which will cost £25,000. The patient, Audrey is unsure about this, especially when she finds out how many operations could be performed with that amount of money. She leaves the hospital because she’d rather die than have people look after her like she did once.

Victoria drops her speed pills in front of Sunny and when he realises what they are, says she could lose her job. She’s irritable and makes out dodgy prescriptions in the wrong units. Victoria confesses to Karen that she’s been taking speed but doesn’t mention that she stole them from the hospital. Karen tells her to see Nick, as Meyer’s busy, who tells her to get counselling and tell him when she has. She says that she’s leaving and dumps her stethoscope in his office. Ray can’t get her to change her mind. He gives her a lecture, telling her she needs to face up to her responsibility. He tells her to get counselling. He gives her a number and tells her he wants to know when she’s called. Victoria says she’s failed and let everybody down; she says she’s leaving. She dumps her stethoscope in his office. Ray later talks to her but she will not change her mind.

Two lads, Keith and Brad, are causing trouble for their friend Darren. They mess with the chest drain and cause him to arrest. Victoria notices what’s wrong and saves Darren’s life. When Nick arrives, Victoria tells him she doesn’t want to quit her job. Nick gives her her stethoscope back.

Jas finds Keith and Brad (Darren’s friends) raiding the drugs cupboard so she chases them until they are cornered in a storeroom. She says she won’t move until she gets the drugs back and one of them grabs a surgical instrument and stabs her in the stomach. She collapses in pain.

Hanssen is thrown when Sahira’s seriously ill father is admitted to Keller and he tries to avoid treating him. Cameron is backed into a...