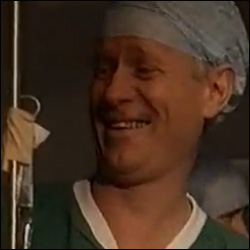 Mike Barratt has returned to Holby on a six month contract, however plans to return to Africa with Rachel. Following Trevor’s accident last series, he is now in a vegetative state – leaving Kate distraught. And the department is crawling with press as the staff demonstrating their new resus equipment.

Baz is told she needs an emergency caesarean – Charlie rushes up from A&E just in time to see the birth of his son, Louis Charles. He goes back downstairs to tell the staff the good news, and ends up being caught up in work.

After a stressful time with her two children, James and Claudia – mother Sarah drives to the pub, but while there, collapses with convulsions. The paramedics brings her in, where her parents and husband, Rob, question her as to where the children are. Sarah is diagnosed as being psychotic and eventually reveals where the children are – tied up and gagged in the boot of her car. New parent Charlie is shocked when she tells him she doesn’t have any feelings for her children.

Brothers, Rick and Toby head to a robbery at a fireworks warehouse, where the security guard, Greg, helps them get in. During the theft, the owner arrives back– the brothers leave Greg locked in the warehouse while they run off. Rick falls and bangs his head, his injury worsens as Toby takes him to A&E, and he dies at the hospital. Meanwhile, Greg at the warehouse, backs a forklift truck into an electricity cable – it ignites some of the fireworks and eventually the warehouse explodes with him inside. Greg is taken in, but dies from severe burns. Toby is arrested.

Jude comforts a nervous woman who has lost a tampon inside her and is worried that she may develop toxic shock syndrome. New SHO Richard McCaig has to extract the tampon.

* Sarah Leonard – admitted to a psychiatric ward, after tying up her children in a car boot.