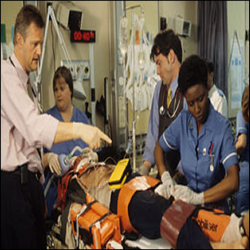 Baz is on maternity leave and Mike is back from Africa to work as a locum while she is away. Sam Colloby, on the other hand, is in for his first day and he is interviewed by Kate and Charlie, who agree that they definitely will give him the job. He has already been working in casualty for six weeks in summer. He tells Kate that he has mainly been studying for exams ever since, though he has had time to be a DJ at his aunt Eileen’s 60th birthday party the previous week.

Len Chesham is driving home from work in his van and falls asleep while driving, ending up almost crashing into some other cars in some traffic lights. He is mad at his neighbour Ron Legget, because he is playing trash metal all days long and Len cannot sleep, therefore blaming the neighbour for him falling asleep at the steering wheel. An angry Len goes and throws a stone through his neighbour’s window, trying to catch his attention and make him stop playing.

Later on both Len and Ron go to a roleplay meeting where they play a clash between a rading party of Danes and an Anglo-Saxon army. Everyone is laughing at Len because his wife has ironed his clothes and everyone asks him if Vikings had irons. When they start “fighting” Len decides to attack Ron to get revenge. All in sudden Len bites off Ron’s forefinger. The Police take both of them into A&E and they try to talk Len into giving the finger back, so that they can put it back, but when Ron does not agree to apologise and instead keeps saying that Len simply does not have the guts to do anything, Len puts the finger into his mouth and, much to everyone’s disgust, eats it. Later on it proves not to have been the finger that he was chewing, because when no one sees, he throws the real finger into the bin.

During the shift Kate goes to visit her husband, Trevor, who does not show any signs of getting better. When she comes into the room where he is lying, she notices that a doctor is showing him to some students, telling them about the intracranal haematoma that Trevor had got from the fall, and which had created pressure on the brain, leading to a lack of oxygen to the brain. Kate is upset to see that they are using him for teaching, but she promises to go to meet the Neurology Consultant, Dr G. Elliot, by the end of her shift. He tries to make Kate realise that there has been no improvement in his condition during the six months that have passed since he fell down the stairs and that tests show progressive wasting of the brain. Kate, however, does not want to admit that there is no hope of him ever waking up.

Adam Hyams is a nine-year-old boy who comes to A&E with his mother. He is very embarrassed, because his penis is inflamed and he has got an infection, and he does not want to tell anyone what has happened. His mother gets suspicious, because he has been staying with his father for a while and she is accusing Adam’s father of assaulting him. When the father comes in they end up shouting at each other all the time and Adam seems to want to be anywhere but there with the two of them. In the end they both leave Adam alone in the cubicle and Richard, by starting to talk about football, finally manages to get the truth out of Adam. Adam explains how his mother has accused his father of being a child and told Adam that he will end up the same if he spends too much time at his father’s house. On top of this, some children at school had told Adam that he looked like a kid, which led to Adam starting to pull his penis to make it longer, so that he would not be a child and risk that his mother would throw him out of the house like she did with his father.

Fay and Amy Carter are twin sisters in their late twenties and they go to visit their parents. Their father has been made redundant and he feels completely useless, especially since they now are a bit short of money. Fay wants to help her parents and offers to buy the house, so that they would not have all their money tied up on the house. Their father is greatly upset when he hears about this and does not agree to sell the house. Amy drives Fay to the railway station so that Fay can take the train home, but on the way Amy loses control of the car. Fay is thrown out of the car and gets so severe head injuries that she cannot be saved. Amy gets some facial fractures, but she proves to be in a much better condiion than everyone thought. Their father is blaming himself, since he, after hearing that one of the sisters was doing poorly, for a second hoped that Amy would make it, if only one of them would.

A football game between Holby and United is taking place and Richard, Charlie, Matt and Josh take great interest in the game, placing bets and spending all their extra time in the staff room in front of the tv. Much to Richard’s distress Holby wins, but he says he will make an official complaint about the standards of the linesmen, because one of Holby’s goals was an offside. Later on Richard finds out that one of the men who has spent hours in reception, trying to get someone to pull a splinter out of his toe, should have been the linesman at the game, but since it took him so long in A&E they had to find someone to stand in for him instead.

* Ron Legget, his neighbour bites his finger off during a role play.

* Fay Carter, woman in her late twenties, severe head injuries after getting thrown from a car.

* Adam Hyams, a nine-year-old boy with an infection and parents that constantly are arguing.

* A man, who is supposed to be the linesman at a football game, has run a splinter into his toe.

A woman going to her dialysis threatment is greeted by the nurse.

Pat: Okay, let’s get you wired up.

Kate is walking down the stairs, going back to A&E after a meeting with Dr Elliot. At the bottom of the stairs she meets Susan and John Carter.

Kate: Oh yes, it’s on the top of the stairs on your right.

Kate stands where she is, looking at them walking up the stairs.

* Ray Hyams, Adam’s father, is played by Andrew Secombe, who provides the voice of Watto in Star Wars Episode I-II.