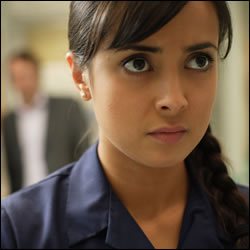 Ric struggles to work while trying to contact Michelle. He has to operate on Callie with Michael and Linden but he messes up and Michael grows annoyed with him. The operation is a success, although Callie is still in a coma.

Meanwhile, Daisha brings prospective adoptive parents to Holby to meet baby Joe. But she becomes more confused than ever as she tries to decide whether to keep Joe or give him up.

Elsewhere, the Holby Christmas party is cancelled, so Donna decides to raise money and organise one herself. Maria and Donna are still not on the best of terms and Maria is confused about Kieron. She then discovers that he’s Sam’s son.

In this article:HC Series 11, Joe Ainsworth