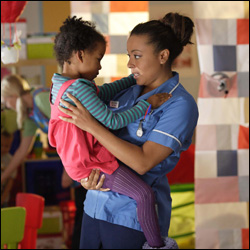 Donna’s half-niece, Mia, turns up out of the blue because her grandmother, Patti, has had another stroke.

Jac can see that Joseph is struggling in his consultant’s position, and things aren’t going well with Faye. Jac wants to support him, but she also wants his job. She tells Michael that she will kick up a stink if the temporary Consultant job is not advertised.

Maria is bowled over by hunky new locum George, but Chrissie isn’t impressed when he turns up late on his first day. He does, however, eventually impress Chrissie, and makes a predatory beeline for Maria.

In this article:HC Series 12, Joe Ainsworth