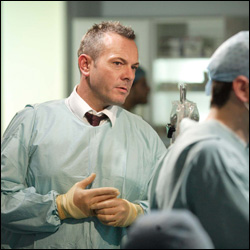 Elliot is called to attend to Charlie, who has had a heart attack. Nick Jordan saved Charlie’s life in the Emergency Department and now Elliot is going to take over his treatment on Darwin, but the two disagree on how to proceed. Elliot is overworked and the pressure of operating on a friend is becoming too much for him. He wants to help Charlie but, in his current condition, could end up being more harmful to him…

Thandie, meanwhile, wants to fool the Home Office into believing that she and Ric are a couple to avoid being investigated for fraudulently marrying, and possibly even deported. Thandie succeeds and Ric is reminded of why he fell for her in the first place. Unable to resist, he kisses her.

In this article:HC Series 12, Mark Catley