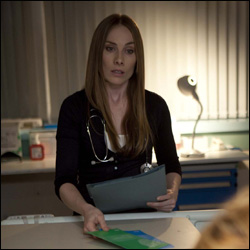 Jac doesn’t let on to the rest of the team that a new patient is her mother, Paula. Paula has returned to see Jac but has fallen ill. Jac breaks the news that she has kidney damage and will need a transplant.

Meanwhile, Oliver wants to win over Connie and Elliot after being late for a session. Oliver passes Penny’s research off as his own, wins praise but gets his comeuppance when new nurse Roberta, having witnessed his treachery, tells him some home truths.

Mark tries to win compensation for Maria, but when Vanessa tells her that her career might be in jeopardy as a result, she decides to withdraw her claim. Enraged by Vanessa’s interference, Mark resigns.

In this article:HC Series 12, Paul Mari