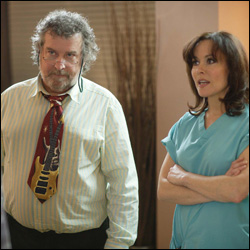 Mark is still refusing to apply for the CEO position because he doesn’t like the politics involved.

It’s not until he comes across a patient whose quality of life could be enhanced significantly by new laser treatment that he decides to go for the job.

Oliver is promoted to F2 but things start going wrong. Penny notices that he is having problems with Connie’s patient, Elaine. Connie is furious with Oliver and he lets slip that Penny slept with a patient. Penny is moved back to AAU.

Donna disappears for a whole day, leaving Maria to cope on her own. After denying wanting the position of ward sister, they slowly change their minds and both apply for the position.

In this article:Chris Murray, HC Series 12

‘Going the Distance’ : Essie worries that she is not being a good foster parent to Parker, but determined to take all the responsibility...