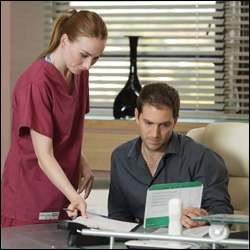 Joseph decides to pull back his hours to spend more time with his infant son Harry, but when Hanssen offers him a promotion it becomes more difficult to put family first. Joseph eventually avoids getting sucked back in to long hours at the expense of his son when he decides to leave the hospital for good.

Sacha has tried everything to get back on Chrissie’s good side. He’s apologised, bought her shoes, and now he’s volunteered to supervise her on her first week after her hearing. But Chrissie isn’t having it and Sacha’s apologetic efforts sideline his patients, putting their health at risk.

When Frieda learns she’s being laid off, Penny begs her to consider applying for an F1 position; she’s been a doctor before, after all. Frieda refuses at first but a day facing the wrath of the unforgiving Malick might just give her the motivation…