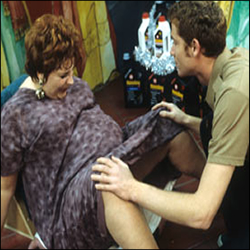 A woman leaves her baby alone while she goes out to buy some cigarettes from the pub. While she’s there two mates from where she used to work turn up, on a bender and already drunk. They persuade her to have a drink, then lead her round other pubs, despite her protests. Somehow she injures her leg and they take her to A&E. She is taken to X-ray; it’s discovered that her leg is broken and they plaster it. She remembers her baby and urges them to hurry up, although she does not tell them why. As Josh and Penny are about to take her home, she tells them why she’s in such a hurry. She tells them that Social Services are already on her back after another incident. When they get in the baby’s gone and she is sure that Social Services have taken her, until her neighbour comes in with the baby. She had heard her crying and let herself in to see to her.

Tom Logan, a man dressed up as Santa and escorted by the police is being treated, having cut his leg. He vanishes. George finds him dressed as a surgeon; she is about to call security but he says it’s Christmas and begs her to let him go so he can be with his family. It looks like he’s persuaded George, but Charlie comes out of the lift and sees him and takes him back to A&E.

Three professors, one of theology and the others who have done work on the Nativity and Christmas, win a Christmas pub quiz. The guy who usually wins it is angry and starts a fight. One is seriously injured but is later stable. The others are arguing about morality. They eventually decide to give the prize money back to the pub, but they give the toys and other things to Amy, saying she’ll have need for them soon and if she doesn’t want them she can give them to paediatrics.

A man (James O’Hara) comes home from work to his wife (Ruth) and six-year-old daughter (Gabby). He is very moody. He locks himself in the bathroom and smashes the mirror with his fist. He and Ruth argue loudly. Gabby hears. She blacks out and falls, hurting her arm. She is taken to A&E and she has a panic attack when her parents start arguing again. Ruth tells Mark that James has been really moody and unlike himself this last week; she says he’s going away to Africa next month for two months and she can’t wait to get rid of him as he is now. James talks to Mark too, saying he knows he’s been in a bad mood all week. Later at the party, someone mentions Malaria and Mark has a flash of inspiration. He goes back to the hospital and suggests to them that it’s James’ anti-malaria drugs that are making him like this. He suggests he changes to a different brand.

Sam blows up at Tina when she asks about Lee. He avoids Charlie all day, and Charlie finds out that he and Lee were together and makes enquiries to other hospitals about Lee. Charlie eventually catches up with Sam at the Christmas party and tells him he knows it was Lee who took the drugs. Sam admits he knew but says he and Lee aren’t together any more. Charlie’s angry that he didn’t say anything, and is unsure whether to include Sam in his report about the theft. He decides he won’t but says that if Sam puts a foot wrong in the future he’s out. He tells Sam to apologise to Mark. Sam kisses Charlie on the forehead and says thanks.

Chloe gets back in time for the party. (She invites P.C. Pat Garratt.) She won’t talk about her mum. Tina tells her all the news and tells her about her and Sean; Tina says she hasn’t told him about the rape. Tina and Sean are together at the party; Sean says they should mingle so people don’t guess. Tina wouldn’t mind if people knew but Sean would. Duffy warns Sean not to hurt Tina or he’ll have her to deal with. Max talks to Duffy about Frank.

George and Mark have been getting on well all day; neither of them is bringing anyone to the party. They dance together. While Mark goes back to the hospital George talks to Nick Jordan, who asks her if it’s about time she moved on from A&E. He buys her a drink but Mark gets back and asks her to dance so she leaves him. Mark tells Max in the gents’ that he’s decided to go and finish his training as a doctor. He and George talk about what went wrong with them; he says she’s to important to let go. They both think that every day should be special.

Penny asks Josh if Rosemary’s coming to the party. Josh is drinking heavily at the party. Penny mentions to Sunny that he has a girlfriend who he had a date with last Thursday; Sunny tells her that Josh was alone in the pub that night. Josh is completely drunk and Penny is worried about him. She asks Charlie to look after him. Charlie and Duffy are about to take him home when Duffy realises that Amy’s missing and they go to look for her. The two guys who came to see Josh last week arrive at the party and take Josh with them.

Amy has been feeling discomfort all day but bites Sunny’s head off whenever he asks if she’s OK. At the party she realises the baby’s coming; she tries to phone for help but the phone in the club isn’t working. She goes outside to look for a phone. Sunny realises she’s not there and comes out to look for her. She’s outside a petrol station when he reaches her. There is no time for her to get to hospital so he takes her inside the petrol station. Sunny delivers the baby boy among some nativity scenery. Charlie and Duffy arrive and she introduces them to Milo.

– Tom Logan, a man dressed up as Santa, and later as a surgeon, has got a cut.

– Edward Stewens, a man in his fifties, gets beaten up after a pub quiz, small skull fracture

– Gabby O’Hara, a little girl that faints and fractures her arm

– Jenny, a young mother that fractures her leg

[Sean, Tina and Sam are in resus with a patient that is having difficulties breathing.]

[Sean and Sam try to stop the man from moving.]

Sean: We’ve got an acute tonsillitis.

[Duffy and Charlie enter the petrol station and find Amy, Sunny and the newborn baby there in the middle of a nativity scenery.]

Sunny: It’s a boy… and I delivered him.

Duffy: Is everything alright?

Charlie: Will you introduce us?

Amy: This is Milo.

– Amy gives birth to her son Milo in a petrol station.

– Nick Jordan (played by Michael French) and Julie Fitzjohn (Nicola Stephenson) from Holby City both appear in the episode.

Guide by Alison and Karin.

‘Mobile’ : David takes a heavily pregnant Robyn to a graveyard, and makes a candid confession about his mental state while visiting his brother’s...