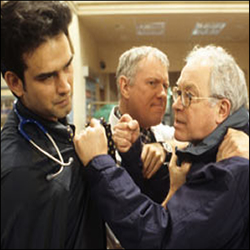 Eve is annoyed to find that a pregnancy test she had got out has disappeared. Chloe has been missing for twenty minutes; we later see her looking at a book on obstetrics.

George has got an interview for the job at Broadway General. She tells Duffy she wants the job as it’s promotion and the hours are better. She’s stressed and still working on Max’s research paper.

Eve and Marius are awkward around one another. Eve asks if he has handed in his notice; he says he’ll do it this afternoon.

Duffy is annoyed that Charlie hasn’t told Max or done anything about Gary Milton. He asks what she expects him to do; she suggests he leaks it to the press. Charlie is stressed and shouts at her. She says that he shouldn’t take it out on her as they are meant to be on the same side.

Amy is back at work. She brings Milo to see everyone before her mum comes to pick him up. Tina tries to get Chloe to hold him but Chloe is unwilling.

The Rafferties are due to meet Gary Milton and Max for a final chance of an out-of-court settlement. Gary wants Max to get there early; he calls down to A&E but Max isn’t there; he isn’t answering the phone in his office either. Charlie goes up to find him. Max is on the point of getting out a bottle of vodka from his desk and he snaps at Charlie for not waiting before to be asked before coming in. He has a go at Charlie, then later has a go at Chloe when she tells him that George has asked him to come down to see a review patient. He tells her that he left instructions to only be called down in the event of an emergency and this isn’t his idea of one. Chloe is upset by his abrupt manner.

Duffy goes up to speak to him, to tell him that he’s due at a meeting. He has got out the Vodka but drops the bottle as she is waiting outside. She goes in and sees it. As she clears up the mess, Max says he hasn’t had any yet and he isn’t an alcoholic; it’s just a vice. He says he wants to care for someone and someone to care for him. Duffy says she cares; he says she just feels sorry for him. Duffy looks at him and says, “Don’t tell me what I feel.” There is a pause as Max takes in what she’s said, but the moment is broken up by Charlie, who comes to fetch Max. He knows there is something the matter with Duffy by her expression but she says she’s fine when he asks.

Max goes to the meeting. The Rafferties’ solicitor says that they want a full written apology, full financial compensation and action against Sean. Gary Milton offers £2000, saying that as Eugene had no dependants then legally his life was worth little. He also offers a memorial bench in the hospital grounds. They go out to think about it; Mr. Rafferty is not at all happy with it but the solicitor says that Gary Milton was right about the money. She also says that if they go to court and lose they will have to pay out a lot, more than they can afford. They decide to accept the offer.

Joy and Phil Butterworth are going with their daughter Mel to see Joy’s mother on her birthday. They are arguing about the present and the tasteless wrapping paper Phil has chosen. They are late setting off because Joy was getting ready. When they arrive Mel rushes up to the toilet and comes down after wetting her pants because she couldn’t get into the bathroom as Joy’s mother was lying on the floor. They call an ambulance and she is taken to Holby A&E. She has had a stroke. Joy gets angry with Phil when he tells Mel that her grandmother may die. Joy thinks Mel should be at home. Sean has tells them that there is no active treatment they can give Joy’s mother; they can only make her comfortable. Chloe sits with Joy and tells her about her own mother dying. Joy goes in to sit with her mother; she takes out the present, a scarf, and puts it around her. Her mother dies. Phil holds her. Chloe hugs Mel.

Claire Pickering brings in her baby who is suffering from an allergic reaction to something in his food. He is taken to resusc and Sean treats him; she wants a specialist. The baby eventually stabilises. Later, however, his breathing starts to deteriorate as his windpipe is swelling up. There is no resusc registrar available and they cannot wait for Max to come down. Sean has to intubate him – it’s the first time he’s done it. He manages it successfully. Max arrives. He tells Sean the outcome but Sean doesn’t look very happy.

Mr. Rafferty comes into A&E and asks to speak to Sean. Tina tells him to warn him off but Sean goes out to see him. Mr. Rafferty punches him and is about to hit him again before Charlie pulls him off and he is taken to the relatives’ room by security. Charlie insists on calling the police despite Sean’s objections. Max goes in to talk to him; he talks about the pressures Sean is under; he says like anyone else, Sean can make mistakes but his mistakes can result in someone dying. He says it’s a big responsibility but Sean has stuck with it. He tells him about the baby Sean has just saved. The police arrive and take him out; on the way Sean stops them and says sorry to Mr. Rafferty. Mr. Rafferty shakes his hand. Charlie asks the police to drop the charges.

Tina patches up Sean’s head. She is shaken up. Sean says he’s not grown-up enough for the job. He starts crying. He later asks Tina out again and she agrees; they are going to take it one step at a time and not just pick up where they left off. Chloe looks upset when Tina tells her.

Max apologises to Charlie for earlier; Charlie accepts the apology. Max asks him to say goodnight to Duffy for him. Later Duffy comes in and Charlie tells her he’s decided to do what she wants him to do – he’ll leak the story to the press. He says he could lose his job over this, and says it’s her fault if he does.

Claire Pickering comes up to Sean as he is leaving. She thanks him for saving her son’s life. She asks what happened to his head. Sean replies, “I really don’t think you want to know that right now.”

[Mrs Rafferty is in her kitchen, making a cup of tea. “Sorry seems to be the hardest word” is playing in the background. She looks up at the newspaper clipping on the wall about her son’s death.]

In this article:Cas Series 13, Christopher Reason 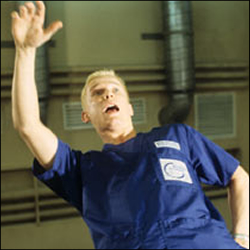 S13 E5 (26 Sep 98) : Toys and Boys by Tony Basgallop Episode Summary Charlie asks Eve if they can go through some rotas. Charlie...