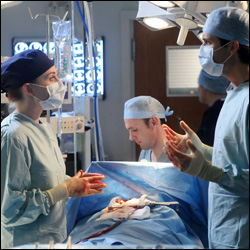 Eddi is suffering with the effects of the previous night’s News Year’s celebration. She doesn’t get much time to feel sorry for herself though when she finds Rachel, a hung-over and freezing woman who has passed out. Eddi takes her under her wing, but comes to loggerheads with Luc when he disagrees on her course of treatment creating a huge rift between them.

Ollie is enjoying his new found respect and a good working relationship with Dan. He knows it’s a far cry from being Jac Naylor’s punch bag. Despite this, Ollie realises that the work is not exactly the adrenaline high octane level he’s used to on Darwin. Wanting to be loyal to Dan, he keeps quiet. When a simple ankle procedure becomes complicated he is happy to be involved again in the world of high stakes surgery. Realising where his heart truly lies he confesses to a disappointed Dan that he wants to return to Darwin.

Sahira is tasked with finding a secret shopper who has been admitted on Darwin. When two unruly and warring patients disrupt things on the ward, Sahira and Greg try to keep things calm whilst flirting with each other. She and Greg strike up New Year’s resolutions- her to give up crisps and Greg cigarettes. When a patient agrees to hypnotise Greg into giving up fags, Sahira cheekily asks whether he could make Greg pander to a demanding patients every whim. When the hypnotist patient dies, Sahira worries about Greg who she still believes is under hypnosis but is annoyed when he confesses that it never worked in the first place. Sahira suspects one of her patients, Martin an annoying hypochondriac of being their mystery secret shopper but is surprised when a satisfaction survey is found in the belongings Rod the hypnotist.

* Song played in this episode is Cee Lo Green ‘Forget You’