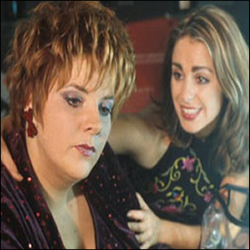 Sean is asleep in the staff room. Charlie tells Duffy he’ll have to say something to Max as he can’t have the consultant fighting with one of his doctors. Duffy asks what he’s going to do about Adam; Charlie’s given him a couple of weeks’ leave but doesn’t see that there’s a problem.

Tim, a doctor and a friend of Sean’s, comes to see him. He took his exam at the same time as Sean and says he passed. Sean tells him about Max and Tina and asks if they can talk sometime as he could do with cheering up.

Chloe picks up a paper and comments to Amy that a band are still looking for a singer. She asks Amy if she’s sung in public before; Amy says she sang at Charlie and Baz’s wedding and Chloe says it’s different singing when you’re smashed out of your skull. Amy is offended. She rings the number and is told she has to audition immediately, so she goes. She isn’t well prepared and the band manager starts making fun of her. However, Amy sings, and arrives back at Holby A&E to tell Chloe she got into the band.

Holly tells Sean that failing his exam doesn’t matter; she says she wouldn’t have passed if she hadn’t had two weeks of leave beforehand. She tells Sean she’d have been just as angry with Max if she were in his shoes, and advises him to go out and get drunk. Sean decides to go and get drunk with Tim; he leaves the shift and heads for Tim’s room in the doctors’ quarters. There’s no answer when he knocks but there’s music on in the room. Sean goes onto the balcony outside to take a look in the room. He sees Tim lying on his bed, unconscious. Sean breaks the door down. He finds Tim with a tourniquet on his arm; there’s a needle lying on the floor. Sean calls an ambulance, and hides the needle and some drugs capsules he finds. Tim is taken to A&E, where the team get to work. They’re not sure what he’s taken. Sean eventually calls Max over and shows him the drugs capsules. Max is angry that he didn’t tell them before; Sean says Tim’s a friend, and he didn’t want him to get in trouble for stealing the drugs. Tim starts to recover, then goes off again. They realise he’s taken insulin on top of dimorph – a professional suicide attempt. Tina finds a letter showing that Tim had failed his exam. Tim comes round, and Sean talks to him, asking why he did it. Tim says he wants to be a great doctor, not just a mediocre one. Sean says he wants to help him; Tim says Sean has already had his chance.

“Michael Flatley” comes into A&E; he says he was bitten by a dog, but the nurses realise it is a human bite. It is gangrenous. He also has a tooth missing. He admits that his real name is Bert Ronson, and he doesn’t want his wife to find out what happened.

“Vera Lynn” arrives in A&E with a broken hand. The X-ray shows a tooth stuck in the hand. Barney, remembering Bert’s missing tooth, asks if she knows him. She says her real name is Theresa. She tells Barney that Bert is her neighbour; he kept following her whatever she did, and watched her through the windows with binoculars. She says she got fed up with it, rang his doorbell and punched him when he answered; she fell over so that his leg was next to her, so she bit it. Theresa is taken to a ward. She goes to find Bert, and apologises to him, saying she did it because she was worried after he’d not been home for a couple of days, and when he opened the door and looked so relaxed something snapped. He said he’d just gone away for the weekend with his wife and kids. She tells him to let her know in future, and cuddles up to him.

Owen James comes into A&E with a rectal bleed – he’s been bleeding for 12 days now, on and off. He needs blood, but it is taking ages to arrive. Patrick sends Chloe to look for it; just after she has gone, a porter arrives with some blood. Patrick is about to give it to Bobby when there’s a phone call for him, so he asks Sean to do it instead. Sean hooks up the blood and it is making its way down the tube when Patrick shouts at him to stop. The blood flow is stopped, and Patrick yells at Sean, asking why he didn’t check the details first: this blood is for James Owen, and none of the details match. Sean protests that Patrick told him to give him the blood, but Patrick won’t take the blame. Luckily, it was stopped in time, and Chloe brings the right blood. Later, Owen tells Patrick that he could have sued for what he did, but says he’s a forgiving man. Patrick is surprised he was aware of what was going on.

Patrick asks Sean if Tim’s got anything to fall back on, as his career as a doctor is almost certainly over. Sean says he probably hasn’t. Patrick says, “Maybe it’s for the best; there’s no point driving on and on if by the end you’re not going to get there, is there, Sean?” Sean says he’s not like that. Patrick says he knows, and that he has every confidence in him – he says he’s still got time to prove it. He tells Sean that Owen was going to sue him (Sean), but that he’d talked him out of it. He says comments that court case wouldn’t help him much, then tells Sean not to dwell on it.

Patrick goes to see Charlie. He says he’s had a word with Sean and that he’ll keep an eye on him. He then asks Charlie about Adam: Patrick didn’t hear Adam’s declaration but has heard rumours since. He asks if Adam’s HIV positive; Charlie says that’s confidential. Patrick goes on about it; Charlie says that none of his staff will be placed in a comprising position, including him, and says he doesn’t want to hear that any pressure’s been applied to any of his team.

Chloe asks Tina if she still has feelings for Sean. Tina says she didn’t know whose side she should have been on last night when Max and Sean were fighting. Chloe says she has to go for what she wants, not what they want.

Frank comes in to see Max; he says his job seems a bit pointless as there are always dealers outside the centre waiting to pick up junkies. Max tells him to stick at it. Tina passes, and Max asks her if she wants to go out; she says another time. Frank goes; there’s something else he wants to tell Max but says it’ll keep.

Charlie talks to Sean, saying maybe he should go home to help him get things in perspective. Sean thanks him.Max asks to speak to Sean. Sean goes up to his office, apologises to Max for his behaviour last night and turns to go. Max accepts the apology but says that’s not what he wanted to talk about. He says they need to keep their personal and professional lives separate. Max says that if they can’t manage to work together then one of them will have to leave. He gives back the money Sean has given him to pay for the damage to his car, saying Sean can probably find a better use for it than he can. Sean says Max has no regard for his feelings or his position in the department, and has now insulted his pride.

Tina goes after Sean with his stethoscope, which he’s left behind. She mentions Tim, saying she can’t understand why he did it. Sean says he understands. Tina says Sean’s not like Tim. He tells her what Max said about one of them having to go if they can’t get along. Tina says he can’t go. He asks for a reason to stay. Tina says she wants him to stay, and hugs him.

Bert Ronson, has been bitten by someone and has broken one of his teeth

– Theresa Conoby, has got half of Bert Ronson’s tooth in her arm

[Max drives into work, with a peace of plastic covering the broken window.]

Max: Well, it will be when I get that sorted.

Max: I’m sure that will be aorund Holby soon enough.

[Tina and Sean are standing outside A&E.]

Sean: It would make sense for me to go.

Tina: What if I don’t want you to? Would that make a difference? I want you to stay…

In this article:Cas Series 14, Jeff Povey