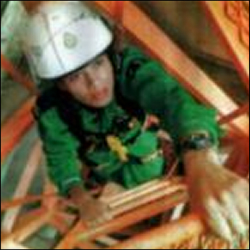 A film crew are following the paramedics around, to make a documentary about their work. Josh is enthusiastic about the idea but Penny isn’t. Tina is doing obs. with new paramedic Finlay Newton and his partner Mel. Finlay is replacing Mike.

In A&E, Duffy is worrying about keeping the place clean for when the TV cameras come in. Holly rushes round trying to avoid the cameras, because she’s not looking her best. Duffy tells her not to be silly, then checks her own appearance when Holly has gone.

Finlay and Mel’s first call-out is to a car parked in a country lane, where Brian is lying on the back seat of the car, having done his back in. Linda, who is with him, claims that he was changing a tyre, but it’s obvious something else was going on. Linda is worried about the TV cameras. Finlay says they’ll have to call the fire brigade in to cut off the top of the car so they can lift Brian out without damaging his back further. Linda is furious at this, asking what her husband will say when he finds out. Brian is taken to A&E, where it is found he has a slipped disc.

Josh and Penny are called out to a flat where Doreen, it’s occupant, has collapsed. The place is filthy and there are rats running around – Doreen keeps them as pets. There is a bite mark on her hand, which is probably the cause of the collapse. She is taken to A&E and told she has to stay in; she is worried about her pets.

Finlay and Mel arrive at a house where Jessica has burned herself by setting off a firework. Her dad blames himself for keeping them in the house. She is in a lot of pain but won’t even have to stay in hospital overnight as the burns aren’t too thick.

A wheelchair user has had an epileptic fit in his home and the ambulance has been called by a neighbour. Josh and Penny arrive; there is a dog inside who barks fiercely when anyone comes near the door. Penny wants to wait for the police to sort out the dog, but Josh says they need to get in. He goes round the back, where the neighbour says there is a key hung from the letterbox, but the dog snaps at him when he tries to reach for it. Penny distracts the dog from the front door; Josh gets the key and goes in, and manages to get the dog away by throwing its toy into another room, then closing the door behind him.

Finlay and Mel get called out to a domestic violence case. At the front of the house, Tom is thrashing a now roofless car, and the paramedics realise he’s Linda’s husband. Linda is inside; Tom has beaten her up. She is taken to A&E and realises she has grounds for divorcing him now (Tom wouldn’t divorce her). Brian is still there; he comes to see her and they realise now they’re out in the open, there’s nothing in the way of them being together.

The TV crew follow Penny as she puts a card on a memorial plaque to Mike, crying. They ask if she wants them to stop filming but she tells them to carry on, and talks about what it was like to be called out to find it’s your friend and colleague who’s hurt.

Both paramedic teams are called to a building site, where a crane driver has collapsed, causing a concrete block to land on one man’s chest, and other crush injuries. The man is having trouble breathing. Finlay, who has been acting the hero all day, starts to panic as he has to put a needle in his chest to allow air in; he calls Josh over and Josh says he’s doing fine. Finlay gets on with it and it works.

Penny goes up the crane with one of the firemen to attend to the driver. She has to climb up the inside and about halfway up says she’s not too good with heights. She makes it to the top; the problem now is how to get the driver down quickly. They get the banksman to get the crane to bring up a skip with a stretcher; Josh comes up in it. Penny and the patient are lowered into the skip on ropes and they get in safely. At the end of the shift, the camera crew ask if she’ll celebrate after a spectacular rescue mission. Penny says, “You should be here when it’s busy.”