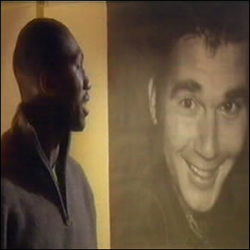 The staff attend Patrick’s funeral – except Lara, who can’t face it – instead she turns up at work. Patrick’s father, Gordon, asks Max if he can look round the department where his son worked. Patrick’s replacement, Dr Simon Kaminski, also shows up in a tuxedo, hungover from the night before and heads straight for the on-call room – where Lara discovers him and calls security before realising who he is. Max tries to urge Lara to go home, and Duffy offers her sympathy, which Lara doesn’t appreciate.

A pedestrian is run over by a female driver – and a nosey old man Ronnie, disrupts the paramedics as they work. The pedestrian is brought in, and claims to be called Matthew Melrose-Dickson but has no other memory – Simon becomes suspicious when Gilly tells him a man with the same name died recently from suicide. Eventually the driver comes in to see him – she is Mrs Melrose-Dickson and the pedestrian, Harry, confesses he was a teaching inspector who felt to blame for her husband’s suicide, and therefore wanted her to kill him, by running infront if her car.

Meanwhile, paramedics recognise Ronnie, when they pick him up from his engagement party, after he collapses from a stroke. He faces a bleak future, but his wife Renee finds it hard to believe he won’t pull through as he had previous ill health before but always recovered. He suffers a respitory arrest and is put on a ventilator – an emotional Lara tells her she must face the truth.

Two Australian women, Jess and Sue are brought in from a deserted road. Jess, who has an injured ankle and collar bone, claims to have tripped over and wishes to be discharged as soon as possible so they can travel back to Australia. Lara diagnoses her injuries, but when Simon later checks her x-rays, finds she also has a punctured lung. Tony discovers they are bone climbers, which is illegal, and when Sue threatens Lara for misdiagnosing her friend, Max backs Lara up.

An old lady is taken to a cubicle after wetting herself in Reception. She won’t speak, and later while Spencer is talking to her, discovers her dead. He tells Tony off.

Gilly sells her friend, Simone, more drugs at Reception, while there is a commotion – and Dillon is head-butted. Anna looks on suspiciously.

At Patrick’s wake, Lara realises she must take time off to grieve and apologises to Duffy. She also introduces herself to Patrick’s father, before Spencer takes her to see his grave at the crematorium, where she says her tearful goodbyes. Meanwhile, Comfort tells Fin she didn’t appreciate his untactful comments during they day when she wanted to attend Patrick’s funeral. He apologises and they have a lingering kiss – before her husband Rob shows up.

Lara is at home and puts on a necklace with her engagement ring on it, meanwhile Max is making a speech at Patrick’s funeral;

Max : Patrick Spiller; arrogant, opinionated, selfish.. and that was on a good day. Harsh? He of all people couldn’t stand formality, pomp or hypocrisy.

Finn and Comfort kiss at Patrick’s wake, as they stop, Rob (her husband) walks in;

Rob : Hi! This is where you are, I was waiting downstairs. (to Finn) Oh Hello

Rob : (to Comfort) You alright? (to Finn) She can be an old softie sometimes! (they exit)

Finn : Very funny! (looks at Patrick’s photo on wall) You set that up didn’t you? Wherever you are. Very funny!

* Lara’s card at the crematorium read ‘Idiot, love you all my days. Skippy’