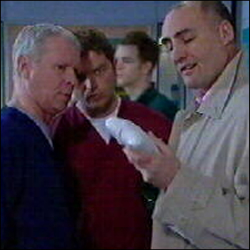 Max storms into Charlie’s office, furious with the front page headlines ‘Dr Drugs’ accusing him of choosing to let the cerebral palsy teenager die. He is convinced the journalists had inside information and is sure Jan has more to hide. Charlie stands by Jan and when he speaks to her, she says it’s either her or Max that will be forced to go.

Nikki accuses Roxy’s boyfriend of theft when she finds money missing from her purse. Jack devises on a money making scam of shaving people’s hair in the department.

After spending the night with Finn, Finn asks Comfort that he hopes she will move in with him permanently, instead of staying with Josh and Colette.Simon’s brother, Stuart, visits him at work to confide in his worries that he thinks Claire is having doubts over their wedding. Simon tries to reassure him.Nikki and Comfort are called to a house where 5 year old Emma has fallen down the stairs. While there she discovers Emma is the daughter of Finn. In A&E, she tells him her daughter is injured and is angry that he kept her a secret. Finn’s ex, Liza, speaks to Comfort and tries to persuade her there is nothing between them anymore, but Comfort feels let down and angry that she has given everything up to be with Finn.

A woman, Paula, is hit by a bike, after running away from a man. Her partner, Blakey, has been shot in the chest and they are both brought into A&E. In the cubicle, an edgy Paula asks for her coat – in which she has secretly stashed a large quantity of drugs. Later, disguised as a clown, the man who chased her before finds her and assaults her – aggravating her injuries. Max saves her life.

Two lovesick teenagers, Anjali and Sam, hideaway in a shed full of bees. Sam gets stung on the neck. They hide when the farmer then brings in a horse and locks the shed. Sam suffers an allergic reaction to the sting, and Anjali has to dodge the horse, to get her mobile and call for help. In A&E Sam’s parents blame Anjali, but she says they were forced to keep their love secret.

Traveller, Mrs Marriot brings in her three young children who have sprayed GTN spray in their mouths. While Anna treats them, she also list other ailments needing treatment including a haircut. Roxy uses Jack’s razor to cut their hair.

Max speaks to Jan and asks her if she will publicly back him. She uncomfortably agrees, but says she must speak to the board first. At the board meeting, Jan plays the situation carefully and offers them her resignation. They close ranks and say they need her – and that Max should be the one to go. The board then call on Max to hear the outcome of their deliberations. Jan offers her hollow sympathy for the way he has been treated and asks him to be put on gardening leave for a month till the situation calms down. Max is furious and resigns. He tells Charlie that the board have shafted him and warns that Jan is only out for herself. Charlie offers his disbelief and sympathy. As he leaves, Tony comes to him with a drugs package that he has found under Paula’s pillow – Max gives a wry smile, thinking what the papers would have made of ‘Dr Drugs’ saving the life of a drug harbourer.

* Two brothers and a sister – sprayed GTN spray in mouths.

Max : Have you seen this? (showing paper)

Max : A word of warning, when that woman decides your face no longer fits, she tends to shift the furniture around – and you beginning to look like an old sofa Charlie!

Charlie : Thanks (Tony enters with packet of drugs)

Tony : I found this, it was in her pillowcase

Max : Let’s have a look (grins) Drug dealer saved by Dr Drugs, whatever will they make of that (walks out the department)