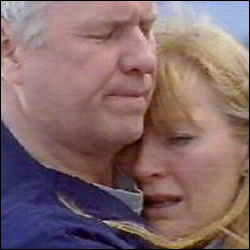 As part of the BBC’s Hitting Home season, this is the first of two episodes of CASUALTY that deal with the issue of domestic violence. Jenny returns home from honeymoon to find her mother-in-law, Sheila, covered in bruises.Jenny returns home from honeymoon to find her mother-in-law, Sheila, covered in bruises and cowering amongst broken furniture. Alarmed, Jenny calls for an ambulance and the police but is astonished that her husband Ian tells her not to make a fuss. Sheila confesses to Comfort, attending at the scene, that she fell down the stairs and makes the same claim at the hospital. Upon returning home, Jenny finds the mess has been cleard, and Comfort predicts her husband is covering for someone. Comfort tries to warn Jenny about the family she has married into, but Ian forces his new wife into the car, hoping she won’t discover the family’s secret; Sheila husband, Bill, is responsible for her bruises.

Colette is in for a bit of a shock of her own when she discovers she is pregnant.

With no sign of Ryan, Duffy also finds herself in a tricky situation. Forced into putting her house up for sale, Duffy decides to look into signing on as an agency nurse instead of wallowing in her misery.

Finally, when Anna’s mother comes in for a check-up, she tries to keep her from seeing Merlin, who later confesses something about his past.