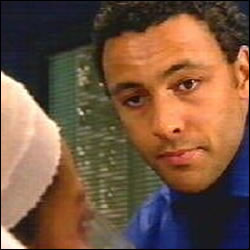 While visiting Tony, Jack is spotted by Bex, who maliciously reports him to the police. He is arrested as he flees the building.

Simon continues his visits to Jane but, tragically, her operation has left her paralysed on one side.

Duffy also comes up against a setback when she is unable to find a new home. But Charlie volunteers to put her and her family up in his house.

When Harry fails to resuscitate a patient, it brings back raw memories of his own wife’s death. Lara intervenes in the situation and offers him comfort.

Merlin receives a letter which tells him that his mother has been found – but he is unsure whether he wants to meet her or not.

In this article:Cas Series 17, Stephen McAteer