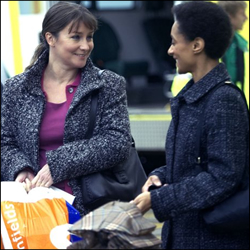 Tess finds Ellen sleeping in the locker room, she tells her that Abs has thrown her out. Abs tells Ellen to stop playing the victim, she admits that she took advantage of him but that she loves him and wants a second chance. A young Russian woman is admitted who cannot speak English. Ellen has to translate, but Abs becomes suspicious of her translation as the woman is hysterical. Abs finds out that the woman was forced to work in a brothel against her will and was begging Ellen for help. She said nothing because she did not want immigration officers to come to the hospital. Abs is disgusted that Ellen was willing to send the woman back to her fate to protect herself. Abs tells her – it is over!

A woman is shopping when a hit and run accident takes place outside the supermarket. She runs to help the boy and when Woody and Luke arrive she introduces herself as the new doctor – Maggie Coldwell.

[ID 1347]Sam[/ID] continues to act strangely and delete computer files. Tess catches him burning patient records in a skip outside the hospital. They fight over the files and she demands to know what is going on. He rambles on about too much information being dangerous so he must destroy the records. Tess is horrified, she finally realises something is seriously wrong.

A doctor called Jas, asks Maggie to get a bed in A&E for his private patient with crohn’s disease. She says no as they need the beds for emergency patients. Jas tries to force Guppy to give the patient a bed, Maggie sees and tells him that Guppy works for her. He says that Guppy is his son and he should do as he says. Maggie tells him to get out.

Bex tells Luke that Pete has asked her out for lunch but she said no as she wants to play hard to get. She decides to bring him a sandwich to his office as a surprise instead. She walks in to find him kissing another woman. She runs back to the hospital distraught. She cannot stop crying and tells Luke what happens. Selena overhears and makes a snide comment. Tess tells her to take the afternoon off.

Charlie receives a mysterious email from a woman asking to meet him at 4.30pm in the on-call room, to talk. He turns up and sees Harry there too. Selena arrives and asks where the two old men needing assistance are. Luke and Woody appear, laughing – Harry and Charlie realise they have been the victims of a practical joke.

The children’s father Jimmy come to visit them, but when Jordan sees him, he starts screaming and saying he does not want him around. Abs takes him to the staff room, worried that th father has been abusing the children and that may be the reason they ran away before. Not much later their mother, Angela who is suffering from MS, is brought in, unconscious after an overdose. Abs asks the husband what is going on and he says that Jordan hates him, because he ran away after hitting Angela after having been drinking. He says they are moving back together, but Jordan finds it difficult. Eventually they find out that Jordan gave his mother an overdose of antidepressants, so that she would be asleep and not open the door when the father came in the morning.

Robbie Stedding, involved in a hit and run. His injuries are too bad for him to survive.

Darren Warman, the guy driving the car that hit Robbie, a cut in his head with a piece of glass in it

Irina Slavik, a young russian woman, cuts herself on broken glass when trying to escape from a brothel where she has been forced to work

Henry Bannister, has a little heart attack after going to the brothel

Nina: I just need to see him.

[Luke knocks on one of the doors]

[Abs is throwing Ellen out of the house]

Ellen: You can’t do this!

[Abs pushes Ellen out of the front door and throws her bag after her. He closes the door and leans against it, trying to calm down]

I need to tell you something. It’s taken me ages to summon up the courage to ask you.

All my love xxxx